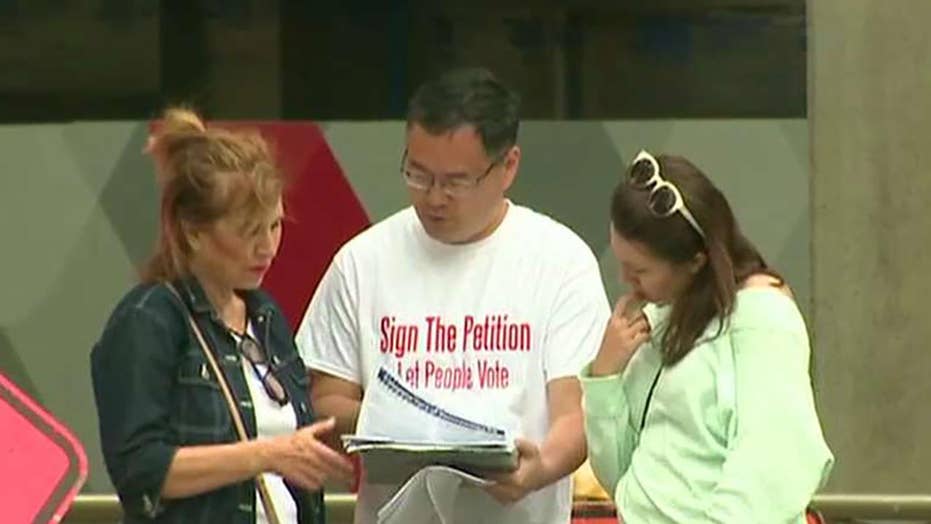 Asian Americans push back against identity politics in Washington state

A group in Washington state is pushing to overturn a law setting employment and college admissions participation goals for blacks and Latinos, saying it discriminates against Asians; Dan Springer reports.

SEATTLE -- Asians in Washington state are gearing up for a fight after the state legislature overturned a 20-year-old, voter-approved ban on affirmative action.

On the last day of session, critics heckled state lawmakers who passed an affirmative action measure that would allow public colleges and other entities to consider race and ethnicity when making decisions on admissions. The vote came 20 years after voters overturned such a measure.

Washington Asians for Equality leaders said it will be hard-working Asian Americans who will lose spots they’ve earned at top public universities.

“The Asian family values education, and it’s a choice people make every day,” said Linda Yang of WA Asians for Equality, “They say, ‘do I watch TV or do I put extra hours in studying?’ When you sacrifice, you should be rewarded for your sacrifice.”

The new law encourages state universities and local governments to set participation goals for under-represented minority groups. Blacks and Latinos make up a combined 14 percent of students at the University of Washington. Asian Americans account for 24 percent. Foreign students are also predominantly Asian.

State Representative Cindy Ryu, a Democrat and Korean-American, admits some bright Chinese applicants won’t get in to UW if the law goes into effect next year.

Government contracts will also go to more minority and women-owned businesses. Nadeen Ismail emigrated from Pakistan and became a U.S. citizen. He opened his commercial painting business in 2006. Ismail says when local governments use affirmative action programs in the contract-bidding process, it opens doors that would otherwise be shut.

“It’s not help,” Ismail said. “It’s exposing us to an opportunity that there’s work, we can go ahead and bid on those projects. So there is no favoritism.”

But opponents say voters should decide. In 1998, Washington state voters banned racial preferences by passing Initiative 200. Asian groups are busy gathering signatures hoping to get a referendum placed on the November ballot.

John Carlson, a host of KVI Radio in Seattle, led the successful I-200 campaign, which passed by 16 percent.

“When you use race when deciding who gets into college, who gets a job, who gets a contract, it’s a zero-sum game,” Carlson said. “Someone will win, someone will lose.”

Carlson said the biggest difference he sees now from 1998 is the awakening of Asian Americans as a political force. In recent years, they’ve filed lawsuits against Harvard and New York City’s gifted schools program alleging discrimination in admissions policies. A federal judge in Boston is expected to rule on the Harvard case within weeks.

According to Pew Research, 73 percent of Americans say race should not be a factor in college admissions. Within the survey, solid majorities of blacks (62 percent), Hispanics (65 percent) and Asians (58 percent) agreed.

Washington Asians for Equality have until July 27 to submit 130,000 valid voter signatures to qualify for this fall’s ballot and let voters decide the issue—again.