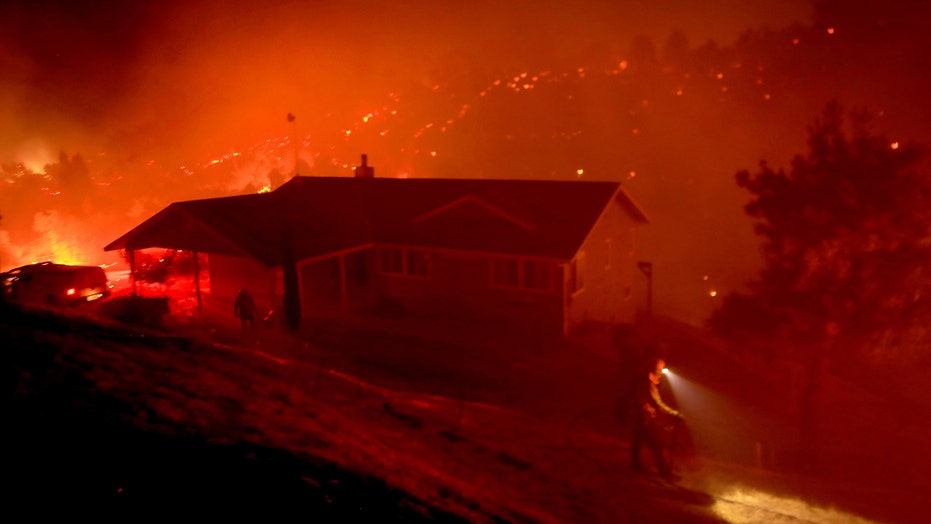 A combination of dry weather and record heat in recent days has led to several wildfires in California, forcing some evacuations on Wednesday.

Officials in Ventura County issued an evacuation order for a remote area of Piru located about 48 miles northwest of downtown Los Angeles for a blaze known as the Lime Fire.

The blaze broke out Wednesday afternoon near the Lake Piru campground and has burned about 450 acres so far. Fire officials said Thursday that two minor injuries have been reported so far, and the fire is 20 percent contained.

Firefighters told FOX11 the blaze has the potential to reach 1,000 acres and at least 25 structures are threatened. Over 125 firefighters are on the scene.

The blaze, which is spreading quickly, is burning in an area where the terrain makes access difficult.

Another blaze known as the Elizabeth Fire broke out Wednesday in the remote hills between Ventura City and Santa Paula, growing to some 275 acres as it burned near transmission towers.

Officials said that fire was about 70 percent contained as of Thursday morning.

Aircraft dropped retardant on the stubborn fire in rugged terrain on Wednesday.

In Los Angeles, firefighters and water-dropping helicopters stopped a fire that burned about 50 acres of brush and grass in Sepulveda Pass along Interstate 405.

The fire erupted around 2 a.m. below the hilltop homes of Bel Air, but there were no evacuations, the Fire Department said.

Conditions were warm and dry with minimal wind. Two firefighters were treated for minor injuries.

The fire's cause was under investigation. It occurred in the same area as a 2017 blaze ignited by a cooking fire in a homeless camp.

LAFD Fire Capt. Erik Scott told FOX11 the fire as "strenuous" and challenging because of the rugged and steep terrain.

“The cause is of paramount concern and it’s under active investigation," he said Wednesday.

The blaze posed no threats on the base to people or buildings, nor to the surrounding communities, according to the Marine Corps base, north of San Diego.

The base announced Thursday morning that the blazes continue to "pose no threat to personnel or structures on or off base."

"Today there are mop up and containment line operations with fire crews continuing to monitor and engage hot spots. Smoke will continue to be visible," officials said.

Firefighters have been chasing small blazes statewide during the spell of hot and very dry weather.

In Northern California, a blaze that threatened about 100 rural homes over the weekend near the town of Winters has finally been contained.

Cal Fire said the Qual Fire in Solano County was contained on Tuesday, after burning 1,827 acres and destroying three structures.

The National Weather Service said a heat advisory was in effect through Wednesday evening for much of Southern California. Downtown Los Angeles reached a record 98 degrees on Tuesday.

Forecasters are calling for cooler temperatures Thursday, as fire weather watches have been posted for Nevada and northern Arizona due to strong winds and low humidity through Friday.