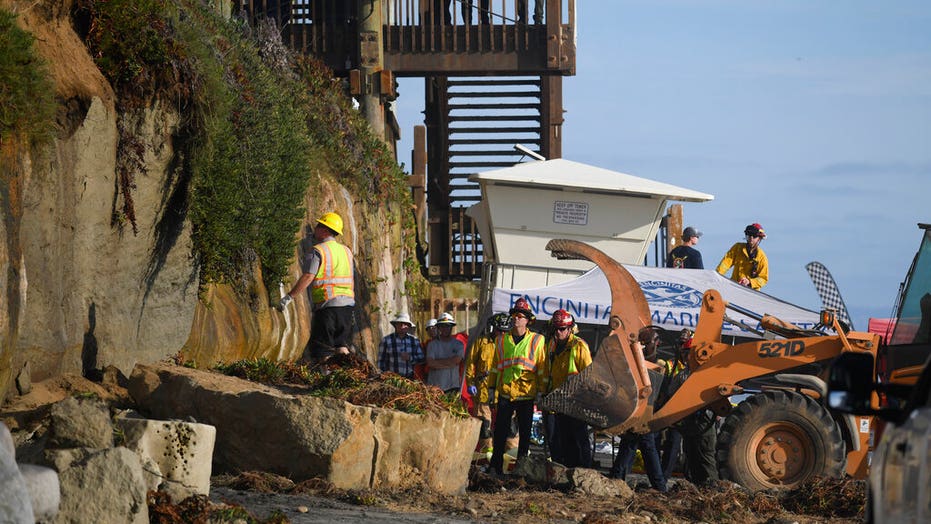 One woman had been pronounced dead at the scene at Grandview Beach in Encinitas, north of San Diego, Friday, but then city officials disclosed in a Twitter message shortly after midnight that two of the three injured people transported to local hospitals had also died.

Authorities did not identify the victims except to say that they were all adults, the San Diego Union-Tribune reported.

The bluff gave way around 3 p.m., according to city officials. The beach is popular with locals and vacationers.<br data-cke-eol="1"> (AP)

Nearby resident Jim Pepperdine told the newspaper he became alarmed when he heard sirens and trucks rumbling into the area.

“I saw first responders, and I saw lifeguards frantically digging people out of the debris,” he told the Union-Tribune.

The bluff gave way around 3 p.m., according to city officials. The beach is popular with locals and vacationers.

The collapse trapped victims in an earthen pile that measured about 10 feet tall at its highest point, according to Encinitas Fire Chief Mike Stein. Rescue crews brought in service dogs to search for victims.

Search and rescue personnel work at the site of a cliff collapse at a popular beach Friday, Aug. 2, 2019, in Encinitas, Calif.  (AP)

City officials closed hundreds of yards of shoreline around the accident site as a precaution.

"This is a naturally eroding coastline," Encinitas Lifeguard Capt. Larry Giles said. "There's really no rhyme or reason but that's what it does naturally. .... This is what it does, and this is how are beaches are actually partially made. It actually has these failures."

"This is a naturally eroding coastline. There's really no rhyme or reason but that's what it does naturally."

The suburbs north of San Diego have contended with rising water levels in the Pacific Ocean, pressuring bluffs along the coast. Some bluffs are fortified with concrete walls to prevent multimillion-dollar homes from falling into the sea.

Homes on top of the bluff were not in any danger, Stein said.