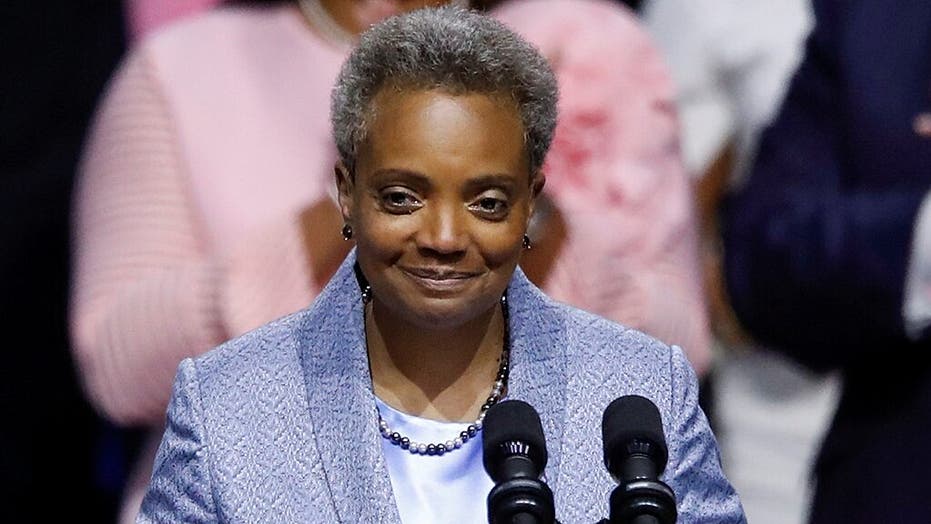 Chicago Mayor Lori Lightfoot blasted the Chicago Teachers Union (CTU) Thursday over a "clearly racist" tweet that depicted her wearing a police uniform while tied up to a chair and being unmasked by white Scobby-Doo cartoon characters.

The now-deleted image is a play on the children's cartoon where the team would solve a mystery by unmasking a villain in each episode.

Lightfoot, an African-American, admitted to not having seen the tweet but said it was described to her.

"If that kind of tweet, which is clearly racist, had been put forward by a right-wing group, we would rightly be denouncing them, and I think our scorn should be no less because it was put out by the CTU,” she said during a news conference. “It’s certainly disappointing when a group that professes to be educators, people who are in our classrooms teaching our young people, would engage in these kinds of really deeply offensive and disappointing tactics."

Lori Lightfoot speaks after being sworn in as Chicago's 56th mayor by Judge Susan E. Cox during an inauguration ceremony at Wintrust Arena in Chicago last year. (REUTERS/Kamil Krzaczynski)

Lightfoot and the CTU have been at odds in recent years, according to the Chicago Tribune, which was compounded by an 11-day strike last year that further eroded their relationship.

In response to the tweet, CTU spokeswoman Chris Geovanis told Fox News that Lightfoot has resisted demands from black activists to defund the Chicago Police Department, remove its officers from Chicago public schools, establish a civilian oversight board to investigate and fire police officers, and make Juneteenth a paid holiday.

“To every demand this mayor and this administration has offered a resounding ‘no,‘” Geovanis said in a statement. “It’s striking that so many of those outraged over a meme have little to nothing to say about the nullification of those most responsible for this moment."

"In this time of deep emotional anguish over visceral images of racial hatred, we empathize with our Black brothers and sisters who are triggered by any image that reminds us of the violence perpetrated against us in this land over 400 years and counting," Geovanis added. "Our intent was, as it always has been, to stir the powerful from their slumber and stand steadfast behind those Black people -- and especially young Black leaders -- in their struggle for a new Chicago built on real justice, not failed policies and broken promises."