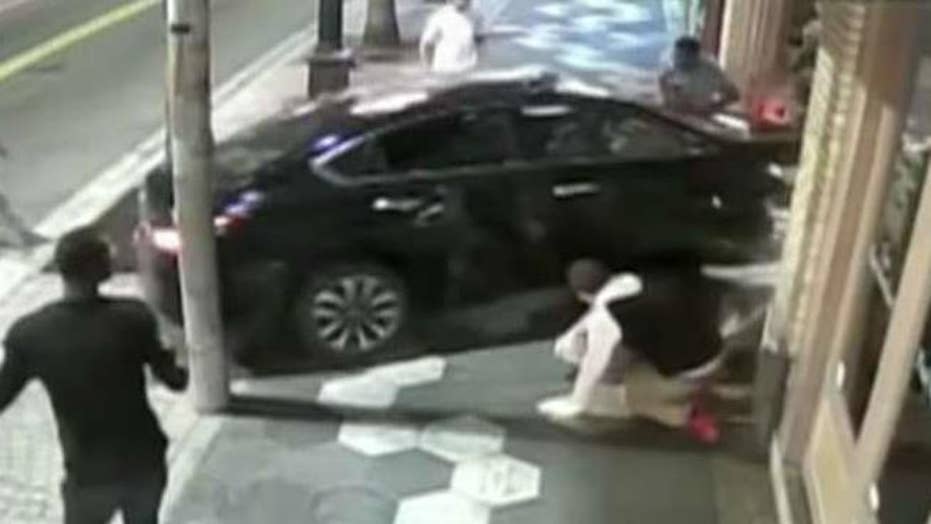 Driver still on the loose, two people were hit by the hat but suffered minor injuries

Around 3:25 a.m. Tuesday, after businesses had closed, a group of men began fighting outside the Bad Monkey Bar on East 7th Avenue in Tampa.

Surveillance cameras captured the brawl, including one subject involved in the fighting who attempted to leave the scene by driving away in a black Nissan.

"He tries to do a U-turn, and it’s really too tight of a street to do that. He gets hung up on the curb," said Steve Hegarty, spokesperson for the Tampa Police Department.

The driver jumped the sidewalk and crashed into several men who were still fighting. One of the men was pushed through the window of the Bad Monkey bar when the car made impact, smashing the glass.

After crashing through the building, the driver left the scene.

Detectives are working to determine if the driver intentionally accelerated his car or if the crash was accidental.

"That’s a big question that we have right now. At the very least, it’s a hit and run. There was damage to the building, clearly, someone was injured and he left the scene," said Hegarty.

Only one of the men on the sidewalk, Michael Silhol, 25, was hurt in the crash. Silhol suffered a minor leg and head injury.