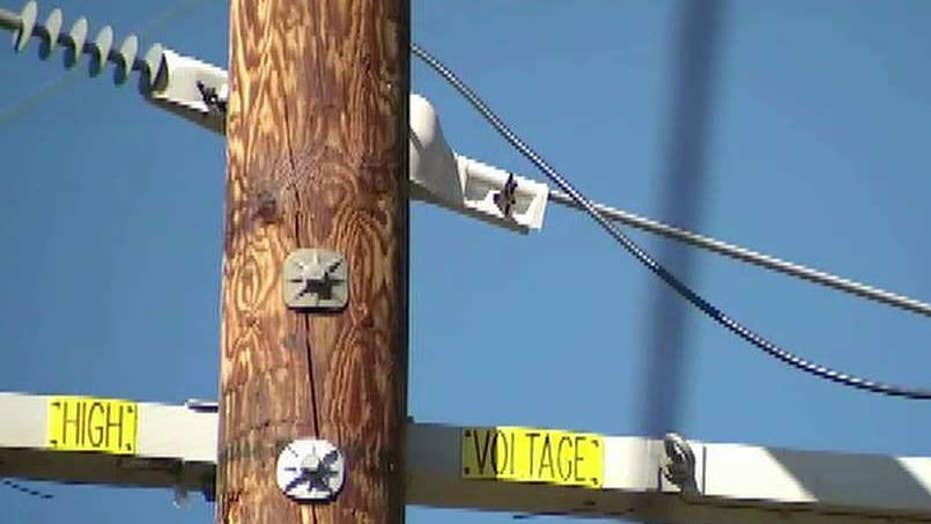 California residents are outraged after being left in the dark by PG&amp;E.

Two people have died in California as wildfires continue to rage out of control Friday in the greater Los Angeles area, forcing the mandatory evacuations of people in more than 20,000 homes.

Los Angeles Fire Chief Ralph Terrazas said the fire along the northern edge of the city has grown to more than 7 square miles and has destroyed at least 25 homes. A middle-aged man who was near where the fire was burning went into cardiac arrest Thursday night and died, the chief added.

"It was a whole curtain of fire," Edwin Bernard, a 73-year-old who had to evacuate his home in the neighborhood of Sylmar Thursday night, told the Associated Press. "There was fire on all sides. We had to leave."

A local television station provided a LIVE link to its coverage.

A firefighter waits for water as the Saddleridge fire flares up near homes in Sylmar, Calif. (AP)

Police Chief Michel Moore said mandatory evacuations in the area have encompassed about 100,000 people in over 20,000 homes.

The blaze erupted around 9 p.m. Thursday along the northern tier of the San Fernando Valley as powerful Santa Ana winds swept through Southern California.

Terrazas said there were sustained winds of 20-25 mph with gusts over 50 mph and relative humidity levels had fallen as low as 3 percent.

"As you can imagine the embers from the wind have been traveling a significant distance which causes another fire to start," Terrazas said.

The fire started in Sylmar, the northernmost portion of the valley, and spread westward at a rate of 800 acres an hour into Porter Ranch, part of a so-called urban-wildland interface where subdivisions crowd against the foothills of the Santa Susana Mountains. The cause wasn't immediately known.

A helicopter drops water while battling the Saddleridge fire in Porter Ranch, Calif., on Friday. (AP)

In Northern California, the lights were back on Friday for more than half of the 2 million residents who lost electricity after the Pacific Gas and Electric Co. utility switched it off on Wednesday to prevent its equipment from sparking wildfires during dry, windy weather.

PG&E restored the power after workers inspected power lines to make sure it was safe to do so. The winds had increased the possibility of transmission lines toppling to the ground and starting wildfires.

In Los Angeles on Friday, helicopters made repeated water drops as crews attacked flames in and around homes. Water- and retardant-dropping airplanes joined the battle after daybreak. About 1,000 firefighters were on the lines.

Evacuations are also still in effect in the inland region east of Los Angeles where a fire erupted Thursday and raged through a mobile home park in the Calimesa area of Riverside County.

Seventy-four buildings were destroyed in that fire, others were damaged and Riverside County authorities were trying to determine if anyone was missing. One person was killed, according to Cal Fire spokeswoman Cathey Mattingly.

Fire danger is high throughout Southern California after the typically dry summer and early fall, and the notorious Santa Ana winds — linked to the spread of many wildfires — bring a dangerous mix of witheringly low humidity levels and powerful gusts.