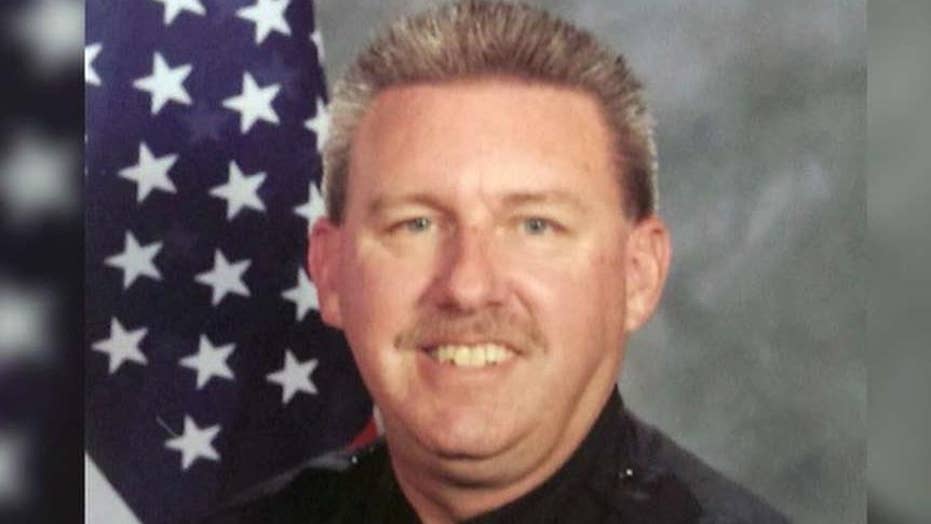 A suburban Los Angeles police chief blasted California's criminal justice reform initiatives Tuesday, one day after a recently paroled gang member fatally shot one of his officers and wounded another.

"We need to wake up. Enough is enough," Whittier police Chief Jeff Piper told a news conference. "You're passing these propositions; you're creating these laws that are raising crimes. It's not good for our communities and it's not good for our officers, What you have today is an example of that."

Michael Christopher Mejia, 26, was arrested Monday after Whittier police Officer Keith Boyer was fatally shot and Officer Patrick Hazell was wounded as they responded to the site of a traffic accident.

Investigators say Mejia, a gang member whose face is covered in tattoos, killed his cousin, Roy Torres, 46, earlier Monday in East Los Angeles before stealing Torres' car. Mejia was driving through Whittier when he rear-ended another vehicle.

When Boyer and Hazell arrived at the scene, a driver pointed them to the vehicle that had rear-ended his car. As the officers approached Mejia, police said, he opened fire and the officers shot back.

Mejia was injured in the ensuring gun battle and remained hospitalized Tuesday.

Mejia was sentenced to four years in prison in 2010 on a felony robbery charge as a member of a street gang and was paroled in 2014, according to Jeffrey Callison, a spokesman for the California Department of Corrections and Rehabilitation.

While on parole, Mejia was arrested again on grand theft and vehicle theft charges and sentenced to an additional two years in prison, Callison said.

Authorities said Mejia had been released from Pelican State Prison in April and placed on probation under a reform measure known as Assembly Bill (AB) 109 that allowed some convicted felons to serve their sentences in county jails and serve probation instead of being sent to state prisons and paroled.

Mejia's latest arrest was for "not cooperating with the search and seizure clause of his probation," sheriff's spokeswoman Nicole Nishida said. He was released on Feb. 11.

State law allowed him to be held for only 10 days after each of those five arrests, Corina said.

State Sen. Jeff Stone, a Republican, said Tuesday that Boyer's slaying "appears to be another example of the danger created by the passage of misleading propositions and bad legislation that have allowed dangerous criminals back onto the streets of California."

Piper and McDonnell also criticized Proposition 57, a reform measure that allows non-violent felons who normally wouldn't be eligible for parole to be considered for early release. State officials said that initiative has not yet been implemented and officials are still drafting the proposed regulations.

California Gov. Jerry Brown campaigned strongly for the ballot measure, unveiling a website and creating radio ads for the initiative that he said could help offenders change their lives.

Critics have said the initiatives pushed lower-level offenders onto the streets without sufficient deterrents against committing new crimes.

However, Callison denied the initiatives had any effect on Mejia's tenure behind bars.

"None of the state's recent criminal justice reforms -- including AB 109, Proposition 47 or Proposition 57 -- impacted when this individual was released from state prison," Callison said.