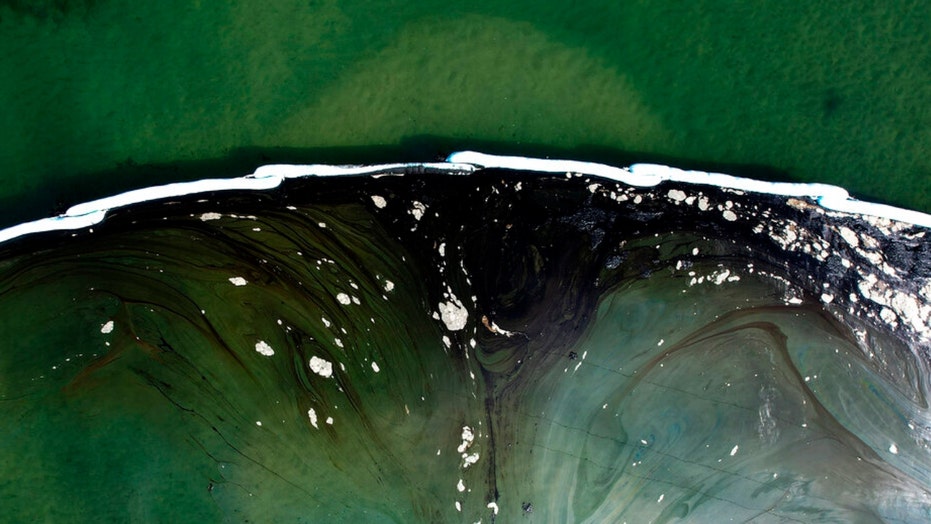 Criminal and civil probes have reportedly been launched after an oil spill off the coast of Huntington Beach, California, sent up to 144,000 gallons of heavy crude into the ocean over the weekend.

Orange County District Attorney Todd Spitzer had said investigators were looking into whether charges could be brought for the spill – even though the leak occurred in waters overseen by the U.S. government – and other officials said additional potential criminal investigations were being pursued by the Justice Department, the U.S. Coast Guard and the California Department of Fish and Wildlife.

A state spokesperson told USA Today late Monday that numerous government probes of the spill and the circumstances that led to it are underway.

"Full federal and state criminal and civil investigations of the spill are underway," Eric Laughlin, spokesman for the California Department of Fish and Wildlife's Oil Spill Prevention Response arm, told the outlet.

On Monday, California Gov. Gavin Newsom proclaimed a state of emergency in Orange County to support emergency response to the spill.

"The state is moving to cut red tape and mobilize all available resources to protect public health and the environment," he said in a statement. "As California continues to lead the nation in phasing out fossil fuels and combating the climate crisis, this incident serves as a reminder of the enormous cost fossil fuels have on our communities and the environment."

The governor's office said the state had deployed personnel from the Department of Fish and Wildlife’s Office of Spill Prevention and Response and the Governor’s Office of Emergency Services to the incident command, coordinating with the U.S. Coast Guard, local agencies and responsible parties.

Coast Guard officials said Monday that investigators were looking into whether a ship’s anchor may have struck a pipeline on the ocean floor.

Cargo ships often pass through the area and backlogs have affected ports in recent months.

Coast Guard Lt. Cmdr. Jeannie Shaye told reporters that the agency was not notified of the spill until early Saturday, though records show its hazardous spill response hotline received the first report of a possible oil slick Friday evening.

Amplify Energy Corp., the company operating three offshore platforms and the pipeline, first reported the spill to the Coast Guard at 8:55 a.m. PT on Saturday.

Amplify Energy CEO Martyn Willsher said company divers were inspecting the area of the suspected leak and that he expected a clearer picture of what caused the damage by Tuesday.

Willsher also said an anchor from a cargo ship striking the pipeline is "one of the distinct possibilities."

The pipeline was supposed to be monitored under an automated leak detection system that would report any problems to a control room, but smaller leaks were expected to take longer to detect, according to a 2016 spill response plan for the Amplify platforms submitted to federal regulators.

Willsher said agencies were notified "instantly" when his company recognized the pipe was leaking – though records show the spill was reported by Witt O'Brien's crisis and emergency management firm, which was listed as the point of contact to the NRC.

Federal and state authorities require fast reporting of a spill.

While the report said the leaking pipe had been shut down, containment of the oil was not confirmed.

Authorities told NBC's "Today" show that about 3% of the oil has been captured thus far.

Annual reports to regulators in 2019 and 2020 revealed that inspections showed nothing inside or outside of the pipe required repairs.

While it is still too soon to determine the impact on the surrounding environment, the number of animals harmed was minimal. Beaches could be closed for weeks and coastal fisheries are closed to both commercial and recreational fishing.