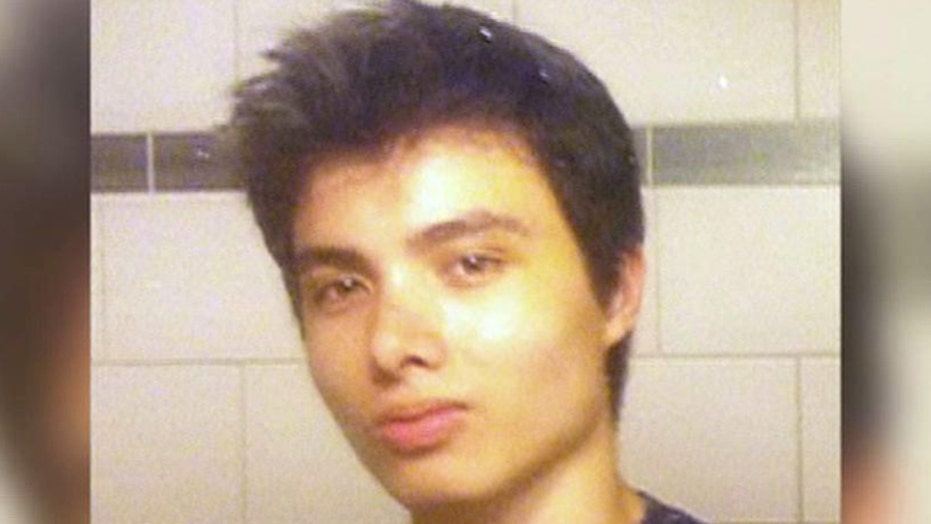 The 22-year-old man suspected of fatally stabbing three of his housemates before carrying out a mass shooting near the University of California, Santa Barbara late Friday feared that police would discover his murderous plan when they visited him last month.

Elliot Rodger, the son of Hollywood director Peter Rodger -- an assistant director on "The Hunger Games" films series -- was identified by police as the suspect in a press conference Saturday evening. The gunman killed three people in the shooting spree in the beachside community of Isla Vista and injured 13 others before he was found dead in his car of a gunshot wound to the head.

The rampage occurred hours after authorities said Rodger warned in a YouTube video that he would kill all who had wronged him.

Police went to Rodger's apartment April 30 to conduct a wellness check after being contacted by members of Rodger's family who were concerned about disturbing videos he had posted on YouTube. Santa Barbara County Sheriff Bill Brown said that deputies had reported back that Rodger was shy, polite and said the Santa Barbara community college student had been having a difficult social life.

In a 140-page manifesto that police discovered in Rodger's apartment Saturday, the suspect writes that he told the police that the videos were a misunderstanding, but adds "If they had demanded to search my room ... That would have ended everything. For a few horrible seconds I thought it was all over."

Rodger claimed in his manifesto that he had begun considering his rampage on New Year's Day of this year. The shooting was supposed to be carried out in April, but Rodger had pushed it back due to illness.

An attorney for Rodger's family said earlier Saturday that they believed Rodger had been the shooter and acknowledged that they had called police weeks before about disturbing YouTube videos concerning "regarding suicide and the killing of people."

Deputies wounded him during two separate shootouts as he sped through Isla Vista, leaving a trail of bloodshed that ended with Rodger apparently shooting himself in the head before crashing his black BMW crashing into a parked car, Brown said.

Of the thirteen people who were injured, eight were injured by gunshots, four were hit by Rodger's car and one suffered a minor injury whose exact cause was not clear yet.

Deputies found three semi-automatic handguns with 400 unspent rounds in his black BMW. All were purchased legally.

Authorities had had three contacts with Rodgers in the past year, including one case in which he claimed to be beaten but deputies suspected he was the aggressor.

Brown called the tragedy "the work of a madman" and said the videotape posted by Rodger the night of the killings  is a "particularly chilling one, in which he looks at the camera and talks about what he is about to do."

In the YouTube video, Rodger sits in a car and looks at the camera, laughing often, and says he is going to take his revenge against humanity.  He describes loneliness and frustration because "girls have never been attracted to me," and says, at age 22, he is still a virgin. The video, which is almost seven minutes long, appears scripted.

"I'll take great pleasure in slaughtering all of you. You will finally see that I am, in truth, the superior one, the true alpha male," he says on the video.

Police described how he spent 10 minutes traveling from one location to another and opened fire on random people after leaving a gruesome scene at his apartment, where three men were stabbed to death.

Earlier Saturday, attorney Alan Shifman issued a statement saying Peter Rodger believed his son, Elliot Rodger, was the shooter. It was unclear how the son would have obtained a gun. The family is staunchly against guns, he added.

"The Rodger family offers their deepest compassion and sympathy to the families involved in this terrible tragedy. We are experiencing the most inconceivable pain, and our hearts go out to everybody involved," Shifman said.

Richard Martinez, the father of Christopher Michaels-Martinez, blamed politicians and gun-rights proponents at a news conference Saturday. "When will this insanity stop? ... Too many have died. We should say to ourselves `not one more,"' he said.

The shootings started around 9:30 p.m. Friday in Isla Vista, a roughly half-square-mile community next to UC Santa Barbara's campus and picturesque beachside cliffs.

Alexander Mattera, 23, said his friend Chris Johnson was walking out of an improv comedy show when he was shot in front of a popular pizza place. He stumbled into a nearby house.

"He walked into these random guys' house bleeding," he said.

Mattera was sitting at a bonfire with friends when at least one gunshot whizzed overhead. The friends ran for cover when they heard the barrage of gunfire.

"We heard so many gunshots. It was unbelievable. I thought they were firecrackers," he said.

Isla Vista, which is centered on university life with outdoor cafes, bike shops, burger joints, sororities and fraternities, was shrouded in fog and unusually quiet Saturday.

Police tape crisscrossed Isla Vista streets, while blood was still visible on the asphalt. Bullet holes pierced windows of a parked car and the IV Deli Mart. A small shrine of flowers was growing outside the business, whose floors inside were stained with blood. For much of the day, the wrecked BMW driven by the shooter remained on the street, its windshield smashed in and its driver's door wide open.

UC Santa Barbara senior Kyley Scarlet said she heard the BMW smash to a halt outside a house she was in. Scarlet, who is a former sorority president, said two women from a sorority next door were killed on the lawn of Alpha Phi, where a pile of flowers grew on Saturday.

Crying students wandered up to the spot, shook their heads and hugged each other.

Scarlet said a third sorority member was wounded there as well.

Scarlet said she was very disturbed by the video describing his anger at sorority girls.

"It's hard thinking my actions, being part of a sorority, led him to do this," she said. "When I saw that video, I was shaking and crying."

In a statement, the university said it was "shocked and saddened" that several students were shot.

"This is almost the kind of event that's impossible to prevent and almost impossible to predict," UC President Janet Napolitano told reporters after giving the commencement speech at Laney College in Oakland, California.

Calif. Gov. Jerry Brown offered his condolences to the victims' families, saying he was saddened to learn "of this senseless tragedy."

The Rodger family is not ready to speak publicly yet, but wants to cooperate fully with police, Shifman said.

"My client's mission in life will be to try to prevent any such tragedies from ever happening again," he said. "This country, this world, needs to address mental illness and the ramifications from not recognizing these illnesses."