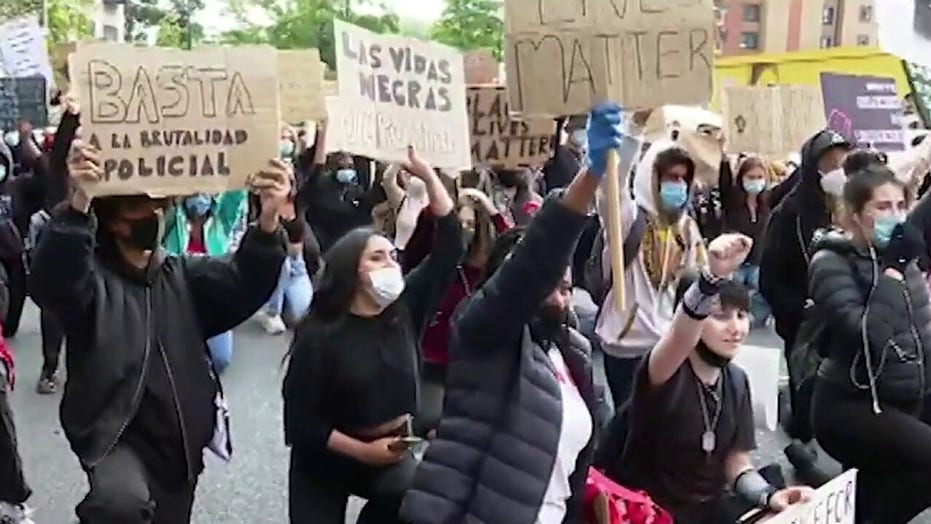 Peaceful protests in London in wake of George Floyd's death

British Prime Minister Boris Johnson on Sunday condemned what he called “racist thuggery” in London over the weekend after protests descended into violence, forcing police to arrest at least 100 people.

“Racist thuggery has no place on our streets. Anyone attacking the police will be met with full force of the law,” Johnson tweeted Saturday night. “These marches & protests have been subverted by violence and breach current guidelines. Racism has no part in the UK and we must work together to make that a reality.”

His remarks came after right-wing extremists descended on London Saturday, fighting with protesters demanding an end to racial injustice, as well as the police, Politico reported.

London Mayor Sadiq Khan blamed the violence solely on the right-wing group. Thousands of people demonstrated in the streets Saturday, and police arrested about 100 in all.

“Millions of Londoners will have been disgusted by the shameful scenes of violence, desecration and racism displayed by the right-wing extremists who gathered in our city today,” Khan tweeted. “In the face of attacks and abuse, our police did a fantastic job to control the situation. Thank you.”

Meanwhile, London Metropolitan Police said a 28-year-old man has been arrested on suspicion of outraging public decency after being photographed urinating on the memorial dedicated to Keith Palmer – the police officer killed by a terrorist trying to enter the Palace of Westminster in 2017. He remained in custody in Essex.

The Black Lives Matter movement has gone global, stretching to several European cities, including London, after the May 25 death of George Floyd, a black man who died after white Minneapolis officer Derek Chauvin was seen kneeling on his neck for nearly nine minutes as three other officers failed to intervene.

The movement has sparked calls to remove statues of historic figures perceived as racist.

Last week, protesters in Bristol toppled a statue of the slave trader Edward Colston into the bay, while American demonstrators have damaged and vandalized Confederate monuments and statues of other figures, including President Thomas Jefferson, who owned slaves.

On Saturday, British Culture Secretary Oliver Dowden addressed a letter to Parliament over the issue of removing statues, saying he would  “like to would like us to use heritage to educate people about all aspects of Britain’s complex past, good and bad, rather than airbrushing history.”

Johnson on Friday decried the vandalism of a statue of World War II-era Prime Minister Winston Churchill, arguing that Britain “cannot edit or censor our past.” Churchill’s name was crossed out and someone spray-painted, “was a racist,” on the statue in Parliament Square.

“The statue of Winston Churchill in Parliament Square is a permanent reminder of his achievement in saving this country – and the whole of Europe – from a fascist and racist tyranny,” Johnson wrote. “It is absurd and shameful that this national monument should today be at risk of attack by violent protestors. Yes, he sometimes expressed opinions that were and are unacceptable to us today, but he was a hero, and he fully deserves his memorial.”

He continued, “We cannot now try to edit or censor our past. We cannot pretend to have a different history. The statues in our cities and towns were put up by previous generations.”

“Whatever progress this country has made in fighting racism – and it has been huge – we all recognize that there is much more work to do,” Johnson went on. “But, it is clear that the protests have been sadly hijacked by extremists intent on violence. The attacks on the police and indiscriminate acts of violence which we have witnessed over the last week are intolerable and they are abhorrent.”

He added that Churchill’s “statue should never have been attacked, and the idiots who did it detract from the central message of Black Lives Matter.”