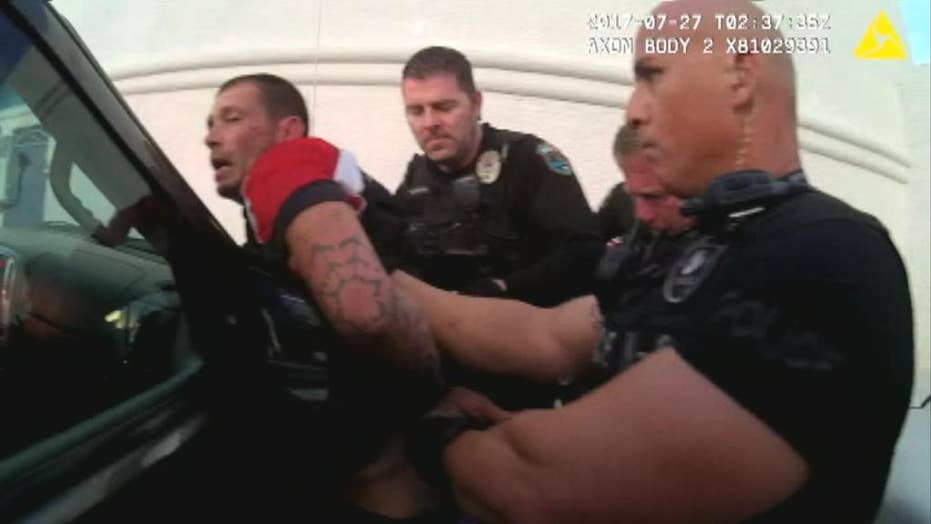 Body camera footage from a 2017 traffic stop in Arizona shows police officers deploying their stun gun on a man at least 11 times – including once in the testicles, a lawsuit claims.

The video – which was released by the victim’s attorney this weekend – shows officers Matt Schneider and Mark Lindsey approach a Ford Taurus they had pulled over in a parking lot.

In the vehicle were three adults – Johnny Wheatcroft, his wife, Anya Chapman, and a family friend – as well as the couple’s two children.

Police said in a statement Friday the vehicle was pulled over because of a traffic violation and cops discovered the driver didn’t have a license.

Wheatcroft, who was a front-seat passenger, declined to show police his driver’s license and questioned why he had to provide identification.

The officers saw him reaching under his seat for a backpack and he “continued to argue, yell and physically resist” as they tried to remove him the vehicle, police said.

Officers eventually threated to use a Taser if Wheatcroft did not exit the vehicle, the video shows.

From there, the situation escalated, with officers using stun guns multiple times on Wheatcroft, as his family watched and screamed at officers to stop.

In the video, Wheatcroft can be heard saying, "I'm not doing nothing'' repeatedly. It also shows Chapman swing a bag filled with bottled drinks at Officer Lindsey, knocking him unconscious, officials said in the statement.

The final Tasing occurred when Officer Schneider allegedly “pulled down the Plaintiff’s shorts and Tased his testicles and perineum,” the lawsuit claims, according to the Arizona Republic.

“Schneider placed his Taser on Johnny Wheatcroft’s penis and screamed, ‘Keep fighting and you’re going to get it again! You want it again? Shut your mouth!’” the lawsuit claims.

Police did not release the department's own copy of the body camera footage, and instead released surveillance-camera video of the incident that shows part of the confrontation from a distance.

Wheatcroft and Chapman were jailed on suspicion of aggravated assault and resisting arrest, but the charges against Wheatcroft were later dropped. Chapman pleaded guilty to a reduced count, the Arizona Republic reported.

The incident prompted a federal lawsuit filed against the police department, which claims the officers used “unlawful, unnecessary, unreasonable and excessive force" on Wheatcroft and violated his civil rights. It seeks damages to be determined at trial.

Wheatcroft is currently in prison on an unrelated burglary charge, the Arizona Republic reported.