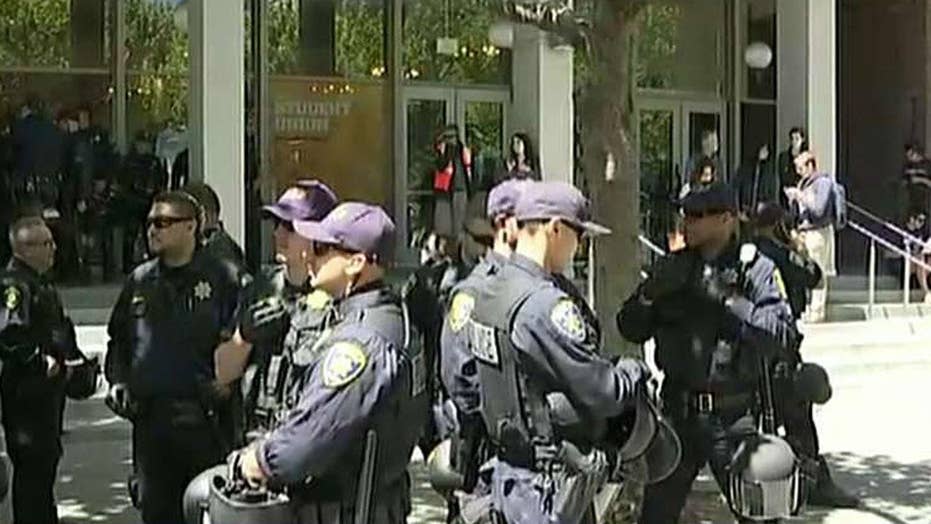 Hundreds of people gathered Thursday near the University of California, Berkeley campus to protest a canceled appearance by conservative speaker Ann Coulter, with at least 6 arrests reported so far.

University police erected barricades and refused to let any protesters enter the campus. At least 6 people were arrested — one for obstructing an officer and wearing a mask to evade police, and another for possessing a knife, Berkeley police Officer Byron White told the Associated Press.

Police in riot gear had prepared for possible violence between supporters and opponents of Coulter, but there were no major confrontations as the raucous rally wrapped up in the late afternoon.

Coulter told Fox News' Tucker Carlson on "Tucker Carlson Tonight" on Thursday that Berkeley claimed the threat of violence is what led to the cancellation, but she's not buying it.

"There are ways of dealing with violence," Coulter said. "We do have a police force."

“Berkeley, as you know all along, they’ve been changing their position every five minutes,” Coulter said to Fox News on Wednesday. “It’s like a game of musical chairs and whenever the music stops the answer is, ‘no, she can’t speak.’ My allies whom I love are on the same side, they ran away, they gave in. And then there was nothing I could do.”

ANN COULTER CANCELS HER SPEECH AT BERKELEY AMID SAFETY DISPUTE

School officials said that the concerns of potential riots had to be taken into consideration.

“This is a university, not a battlefield,” Berkeley Chancellor Nicholas B. Dirks said in a letter sent to campus on Wednesday.

Berkeley student Joseph Pagadara, 19, told the AP he had been worried about violence and added that the university is caught in the middle of the country's political divide.

"Both sides are so intolerant of each other. We are a divided country. We need to listen to each other but we're each caught in our own bubbles," he said.

While the afternoon rally ended without serious conflict, police at one point formed a human wall in the street separating anti-Trump protesters from the park where pro-Trump groups were gathered.

Anti-Coulter protesters at the park held a banner that read: "It's not about 'free speech,' it's about bigots trying to normalize hate."

Officers took selfies with students in an attempt to lighten the mood.

Gavin McInnes, co-founder of Vice Media and founder of the pro-Trump "Proud Boys," spoke at the park gathering later in the day. He said America doesn't have an obligation to take people from other countries.

"We are here because Ann Coulter got canceled," he said. "She is one of the most inspiring writers in America today. She is an American hero."

Wilson Grafstrom, an 18-year-old high school student from Menlo Park, said it was "a shame" she couldn't speak in the home of the free speech movement.

He wore a military grade helmet with a "Make America Great Again" sticker across the back, goggles, gas mask and knee pads. He blamed Coulter opponents for forcing him to gear up for problems.

Many at the park rally about a mile from the university's main Sproul Plaza also wore military grade helmets and body armor. Some had "Build That Wall" or Trump stickers across their headgear. One man had duct tape reading "Berkeley" over his mouth.

Protesters from the International Socialist Organization held what they called n "Alt Right Delete" rally with signs reading "Refuse Fascism" and "Fascist free campus." The group endorses free speech, and some members oppose the way Coulter and others have co-opted the free speech movement.

"I don't like Ann Coulter's views, but I don't think in this case the right move was to shut her down," graduate student Yevgeniy Melguy told the Associated Press, who held a sign that read "Immigrants Are Welcome Here."

Although the school is committed to defending free speech, Dirks said, they also need to protect students.

“The university has two non-negotiable commitments, one to Free Speech the other to the safety of our campus community.”

Berkeley officials had previously cited “very specific intelligence” that Coulter and students could be endangered.

“I’m not just some homeless person wondering onto the square, but I’d be allowed to speak then too,” Coulter said. “They (Berkeley) are really outside the mainstream, they are publicly funded, forget this is where free speech movement started, the amount of money they get from the state and federal government. All of the people who should have been standing up for the First Amendment here, all ran away with their tails tucked between their legs.”

Officials at UC Berkeley said last week they feared renewed violence on campus if Coulter followed through with plans to speak.

They cited "very specific intelligence" of threats that could endanger Coulter and students, as Berkeley becomes a platform for extremist protesters on both sides of the political spectrum.

Efforts by the university to cancel or delay the Coulter event dealt a blow to Berkeley's image as a bastion of tolerance and free speech.

Earlier this month, a bloody brawl broke out in downtown Berkeley at a pro-Trump protest that featured speeches by members of the white nationalist right. They clashed with a group of Trump critics who called themselves anti-fascists.

In February, violent protesters forced the cancellation of a speech by right-wing writer Milo Yiannopoulos, who like Coulter was invited by campus Republicans.

The Berkeley College Republicans and the Young America's Foundation, a conservative group that had helped book Coulter's campus speaking events, both pulled their support Tuesday citing fears of violence. They blamed the university for failing to ensure protection of conservative speakers.