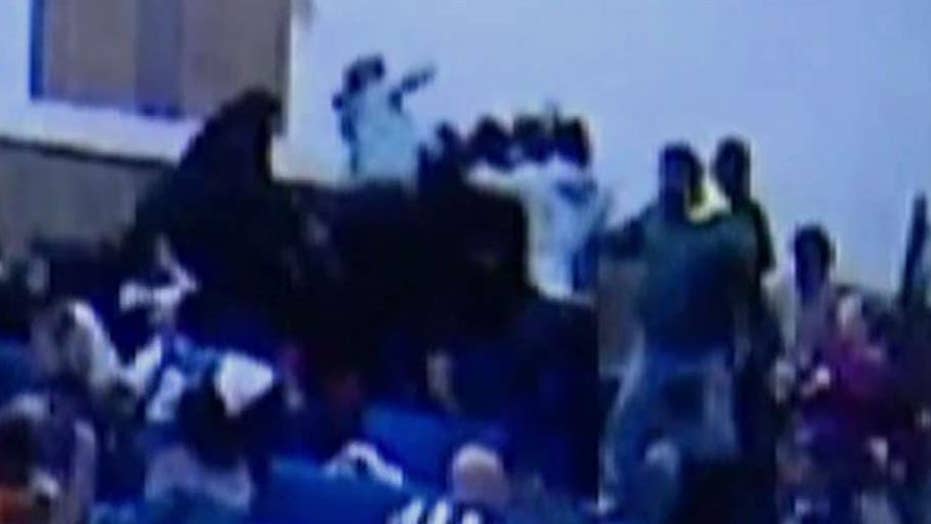 Five women and one teen have been charged with throwing punches at a middle school basketball game in Pennsville, N.J.

The action at a boys’ basketball game at a middle school in New Jersey quickly shifted off the court Saturday when a brawl broke out in the stands.

The incident happened around 9 p.m. during the Salem County Rural Basketball League game at Pennsville Middle School, located about 35 miles south of Philadelphia.

In surveillance video released by police, a woman is seen getting up from her seat and confronting a group of people from the opposing team. Moments later, fists begin to fly and a player can be seen running off the court into the stands.

"I don't know if he was up there to defend his mom or what, but he's involved in this also," Pennsville Police Chief Allen Cummings told FOX29.

At one point, a woman hands a baby to a player on the court before running to join in the brawl, punching another woman from behind.

The brawl broke out at the Pennsville Middle School on Saturday during a basketball game. (Pennsville Police)

"Right there, drops the child off on the bench and she runs across the court and assaults a woman from behind," Cummings said.

Referees and bystanders in the gym eventually broke up the fight and the four women involved in the brawl are now facing charges.

Mike Ausland, president of the Salem County Rural League, told FOX29 it was "sad" to see adults get out of hand during a game, and that any families or players involved in the fight will also face disciplinary action.

"Seeing it for the first time is pretty astonishing," he said. It's a lot to take in."