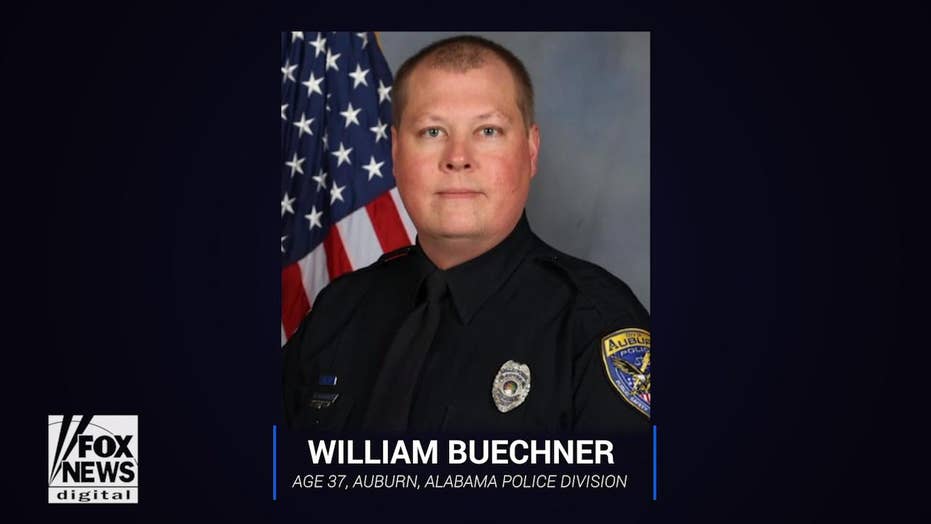 Officer William Buechner was shot and killed while responding to a domestic disturbance on May 19th, 2019. Buechner served with the Auburn Police Division in Alabama for 13 years and leaves behind his wife, teenage daughter, and infant son.

Police Officer Bradley Henderson recalls how it would take fellow officer William Buechner a good 15 minutes to clear all his safety gear out of his patrol car -- something he was dogged about by his co-workers.

“He’d take out his vest, extra magazines, guns, other gear,” Henderson said. “He wasn’t excessive, but he just very prepared. He put a lot of time and energy into making sure not only that he was prepared, but his fellow officers, too.”

Buechner (pronounced BIK-ner) also stood out among his fellow officers at the Auburn Police Department in Alabama for his knowledge of tactics and procedure, Henderson added.  “He wanted to make sure cases he was assigned to were done properly,” Henderson said.

When Buechner found out that the latest installment of one of his favorite action-film franchises, “John Wick,” was going to play nearby, he decided to round up about a dozen of the officers from the department to see it on Friday, May 17.

Auburn Police Officer William Buechner, who was killed while responding to a domestic disturbance report on Sunday, May 19. (Auburn Police Department via AP)

Henderson, who was part of the group, said it was unusual for so many of his colleagues to go on an outing, which began with lunch.

“Will was so happy to get everybody together,” he said. “Will worked all the time, so he was so excited about going to see 'John Wick,' with Keanu Reeves and Halle Berry. Almost everybody from our shift went.”

“That," Henderson said, "was the last time we were all together.”

Two days later, Buechner, a 13-year department veteran, was killed while responding with other officers to a domestic violence call.

Police say Grady Wilkes, 29, was wearing camouflage, body armor and a helmet when the officers approached. He is said to have opened fire on Buechner, killing him and injuring two other officers who survived. Police captured Wilkes, who had led an Alabama National Guard fire team, nine hours later, after a massive manhunt. He was charged with capital murder and other offenses.

“Domestic calls are so dangerous because there’s no way to predict someone’s mindset because it’s been altered; they’re in an angry situation, and sometimes there’s also alcohol,” Henderson said. “We go into the situation being as prepared as possible, but at the same time without escalating the situation.”

“We try to use scrutiny as the situation is happening,” he said, “but who would think that someone will open the door and just start shooting at you? We can’t be prepared for every situation.”

Henderson, who was off duty that fateful day, rushed to the scene as soon as he heard that Buechner had been struck.

“I was with him 10 minutes later; I rode with him in the ambulance to the hospital,” he said, noting how different things had been just 48 hours earlier, at that lunch and that screening of “John Wick.”

Buechner, married with two kids, died in the ER.

“He was a dedicated servant,” Henderson said. “His life was to help people, that’s all he ever wanted to do.”

He thought about how methodical his colleague was, how he prioritized the safety of his fellow officers.

“I wasn’t there on the scene,” Henderson said. Still, he knows one thing for certain: “I have no doubt the reasons the other officers are alive is because of his actions.”

Henderson, like others in the Auburn Police Department, is grappling with his friend’s death. But he is determined to forge ahead in serving the community, in the spirit of Buechner and those things that made him and many others choose police work:

We’re going to get up every day, we’re going to put our vest on every day and do what we can to protect them – no matter what they do, because everybody deserves to be safe and happy.”