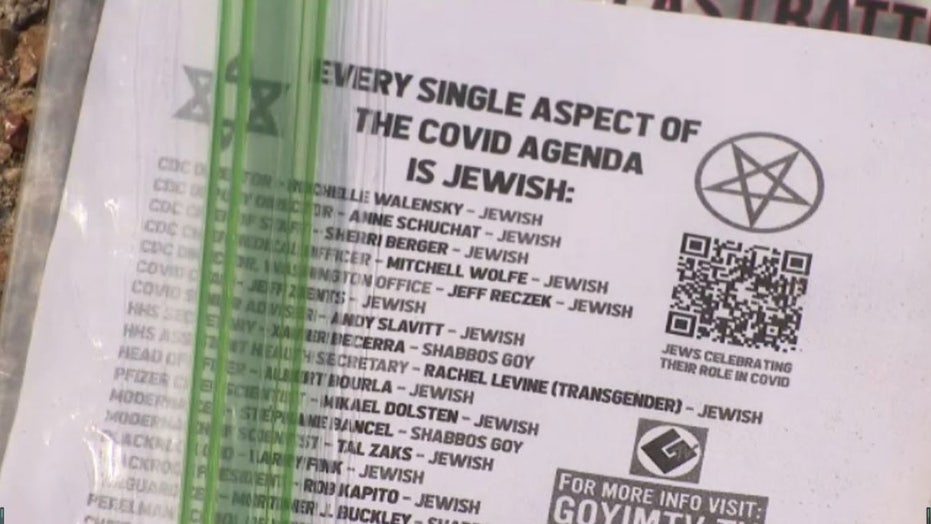 Communities in multiple cities across the country have reported a disturbing trend of antisemitic flyers being left in their neighborhoods in recent weeks, according to local reports.

Flyers delivered in plastic sandwich bags that made inaccurate claims about Jewish people and COVID-19 have been reported in cities in California’s Bay Area, Florida, Texas and Colorado. Some also named members of the Centers for Disease Control and Prevention as Jewish.

One flyer left in a driveway in Colleyville, Texas, claimed "every single aspect of the COVID agenda is Jewish," FOX4 Dallas reported.

Flyers delivered in plastic sandwich bags that made inaccurate claims about Jewish people and COVID-19 have been reported in cities in California’s Bay Area, Florida, Texas and Colorado.  (Fox4 Dallas KDFW)

"In what appears to be a coordinated effort in cities across the country, anti-Semitic and other racist materials were distributed in clear sandwich bags to parts of our city overnight," Colleyville Mayor Richard Newton said Sunday in a written statement.

Other local leaders in cities where the flyers were found have similarly said there is no room for hate in their communities.

"I’m not going to go through and read it. I’m just going to pick them up and throw them away," one Colleyville resident said.

Residents of Miami Beach and Surfside, Florida, told WSVN-TV that hate speech was written on the back of the flyers left there in late January.

"One of the things they say is to ‘sacrifice people, including Jews, sometimes when necessary,’" a resident said of the flyers. "I mean, that is, to me, that’s hate speech."

Residents of Parker, Colorado, located outside Denver, said similar "upsetting" and "disturbing" flyers were distributed throughout the neighborhood over the weekend, the Denver Channel reported.

On the West Coast, neighborhoods in the Bay Area were also targeted with similar antisemitic flyers, for a second time, FOX2 Oakland reported.

"This is driven by a hatred of Jews. And it’s an opportunity to use COVID to blame Jews or COVID," said Santa Clara County District Attorney Jeff Rosen.

Authorities in the affected areas are investigating the incidents.