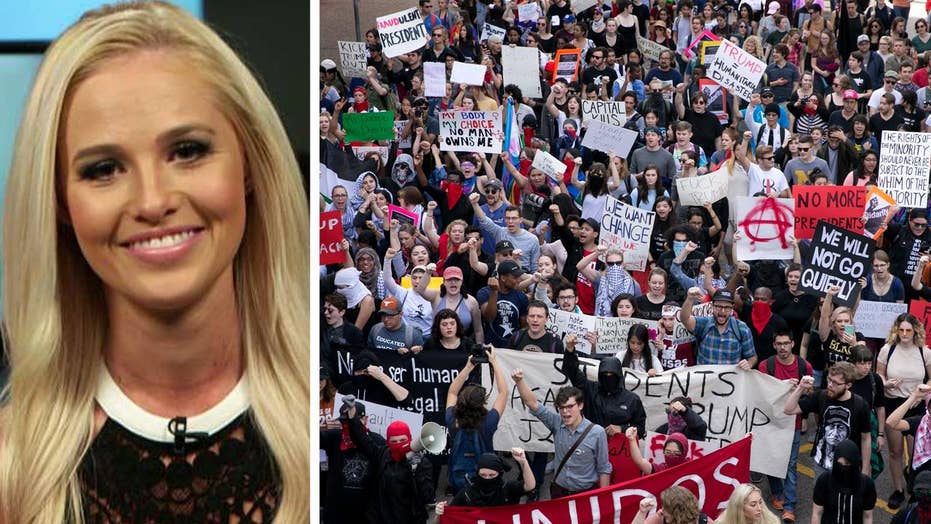 Tomi Lahren sounds off on Trump backlash on liberal campuses

Republicans now hold sway on Capitol Hill, but on college campuses across the country many conservatives say they are increasingly under threat and being shut out of the political dialogue – with tensions only escalating as President Trump unveils controversial measures.

Allison Coukos, director of public relations for the George Washington College Republicans and a junior majoring in political science, told Fox News that after the president signed a slew of executive orders last week, the political tension on campus intensified. She said the hostility toward her group became so extreme that this week it sent out an open invitation to everyone on campus to join them in a “friendly discussion.”

While it is nothing new for Republicans to feel alienated on typically liberal-minded campuses, Trump’s election has seemingly ushered in a new level of enmity for conservative students and professors. Coukos said she has basically had to stop discussing politics altogether.

“Students have told me of instances of harassment. We had a member spat on when they were wearing a ‘Make America Great Again’ hat,” Coukos said. “On a liberal campus, it is not necessarily easy being a Republican. Students who don’t know you are more inclined to hold negative views toward you.”

Last week, video surfaced of a left-leaning college student physically and verbally assaulting a conservative leader at West Virginia University during a meeting to organize a joint debate. Many GOPers claim that they are subject to “sexist, racist and bigot” accusations from strangers, and that the animosity is hindering healthy debate, friendships – and even one’s ability to get good grades.

Jordan Martinez, a 24-year-old U.S Army combat veteran who is now a graduate student at the University of Southern California’s School of Cinematic Arts, said he has been shocked with the extreme shutdown of political discourse that doesn’t seem to fit the liberal narrative.

“Students are constantly told that we live in troubled times since we have Trump as our president. I have had professors constantly show their biases and even felt they have graded me different based upon their knowledge of my political philosophy,” he said. “USC has consistently pushed its political agenda, while often humiliating anyone else who has a different opinion. I would never have guessed they would be so against free thinking.”

Two days prior to the inauguration, according to Martinez, professors introduced a documentary filmmaker who said that he was part of an anti-Trump movement and invited students to join the protests in Downtown Los Angeles. He gave each student two forms which were “delegitimizing Trump's election” and stated that he and Pence were “fascist.”

“Later on in the day, from a student assistant from another class, I received a mass email with a similar message stating that it is unbelievable that we have Trump as a president,” Martinez said. “It invited students to participate using any of their skills to help with the protests. The email invited students to meet in a room on campus to prepare for the protests.”

Protests around the inauguration subsequently erupted around the nation – some peaceful, but some leading to intense physical and verbal confrontations. There are still some impassioned protests throughout the country.

Martinez observed that the past week of executive orders has brought about more epithets toward Trump followers and professors continuing to compare Trump to Hitler.

But Lily Vaughn – vice president of USC’s College Democrats – said that she has never observed a professor attempt to deliberately convince others of his or her political beliefs, and said the situation at USC was “far from tense.” However, she stressed that if one wants to be involved in politics, then disagreements or heated rancor simply come with the territory.

“If some community members choose not to associate with someone who holds beliefs based on ignorance, prejudice, or intolerance,” Vaughn said with regards to those who dismiss Trump supporters, “that is a perfectly valid choice to make.”

But Republican students aren’t the only ones embroiled in the furor of political disputes. So are college professors.

In November, University of Rochester’s Ted Pawlicki was forced to resign, which he did, as undergraduate program director of the Department of Computer Science – a position he held for 18 years – after posting some comedic Trump support on an anti-Trump Facebook page after the election. Pawlicki came under fire after the post and was accused of being “insensitive” to his students.

“On our campus, Republicans and conservatives certainly feel that they are a minority, but we don’t feel excluded,” Pawlicki, who still works at the university, told Fox News over email. “One positive development is that the protests are taking on a more practical and less angry character. While students are still venting frustration, we have seen more thoughtful action develop – letter writing, petition drives, informational workshops.”

Daniel Bonevac, a professor of philosophy at the University of Texas, noted that while the university has a “strong tradition of respectful disagreement,” Trump supporters have chosen to stay quiet because it is so “politically incorrect” to support him.

But Bonevac bucked the trend and made his stance known even before Trump became president. When he did, some students stopped coming to class and a few others attempted to stir up trouble, he said. Ultimately though, he said he was shocked by the support he received.

“I had expected to encounter more hostility than I did,” Bonevac said. “I got no nasty reactions in person.”

Herman Gabaldon, an Air Force combat veteran now enrolled at Central New Mexico University, told Fox News that his campus experience – as a recently retired military man and a conservative – so far has garnered mixed reactions. Yet, he is optimistic that the school will remain a platform for free speech.

“One student said he was offended by the Glock sticker on my planner, so I told him I felt the same about his ‘Megadeath’ band sticker,” Gabaldon said, adding that others have been more open to his points of view. “Some students wear safety pins in class, so some of us veterans wear firing pins. A sociology professor asked me about it and shook my hand. To him, it is all about healthy debate – so long as you can back up your argument. That’s what it is all about.”