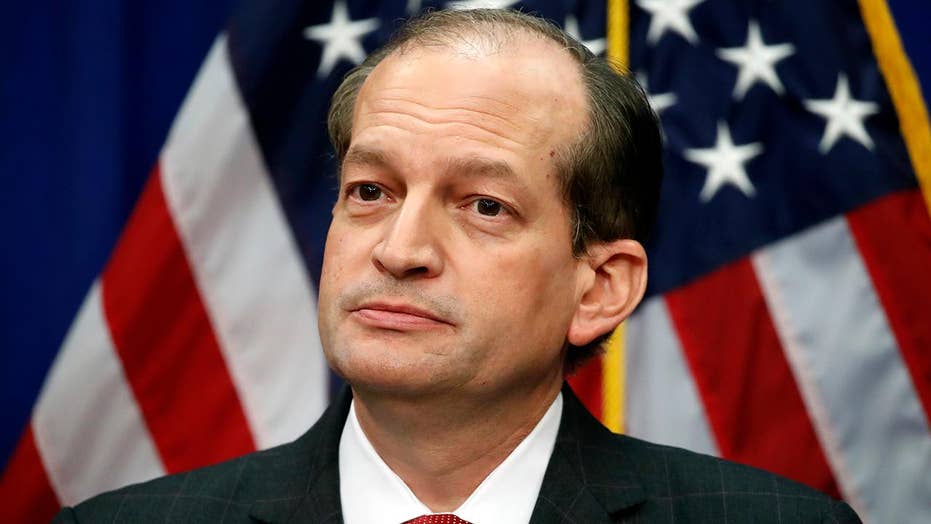 Acosta unloaded on Barry Krischer, a Democrat who previously served as the Palm Beach County State Attorney overseeing the Epstein case more than a decade ago.

Amid calls for his resignation, Acosta blamed Krischer's office for being "ready to let Epstein walk free, no jail time, nothing." Acosta said that was "completely unacceptable" and, when the U.S. attorney's office became involved, his office secured jail time — 13 months with work-release privileges — restitution and registration as a sex offender.

For his part, Krischer has disputed this characterization, saying in a statement that he "can emphatically state that Mr. Acosta’s recollection of this matter is completely wrong," and adding Acosta "should not be allowed to rewrite history."

Before Wednesday's news conference, Krischer may have been best-known for his prosecution of Republican media icon Rush Limbaugh, who was charged with "doctor shopping" following a years-long investigation, the Daily Caller noted.

Since leaving the Palm Beach County State Attorney's Office, Krischer transitioned into championing social causes. In 2018, he hosted a training for other prosecutors "on the dynamics of sexual assault, building the strongest possible case, evidence-based prosecution and incorporating domestic violence statutes when necessary."

But during the Epstein case, Krischer allegedly pressured investigators to downgrade the charges or to drop the case entirely, according to a Miami Herald report published in 2018 and cited by the Caller.

According to authorities in New York, Epstein, 66, created and maintained a "vast network" and operation from 2002 "up to and including" 2005, enabling him to "sexually exploit and abuse dozens of underage girls" in addition to paying victims to recruit other underage girls.

After his 2008 conviction, Epstein was designated a "Level 3" offender in New York —meaning there was a "high risk of re-offense." According to a New York Post report published Wednesday, Epstein was supposed to check in with the NYPD every 90 days following an order from a Manhattan judge.

But the police department reportedly didn't require that because the politically-connected Epstein claimed his primary residence was a controversial private island in the U.S. Virgin Islands — not New York.

NYPD Deputy Commissioner Phil Walzak on Thursday told Fox News the department "is proud of its hard work alongside our federal partners to make the case against Epstein that lead to his arrest for his vile crimes, and that will ultimately bring justice for his victims. The NYPD Sex Offender Monitoring Unit monitored Epstein while his reporting address was in New York City."

Chief of Detectives Dermot Shea tweeted that, per New York State law, Epstein registered as a sex offender in 2010 and "BEFORE his legally mandated first check-in "he changed his residence to the Virgin Islands requiring monitoring to take place in that jurisdiction, NOT in New York."

Shea said the NYPD follows the same protocol for all registered sex offenders referred to them.