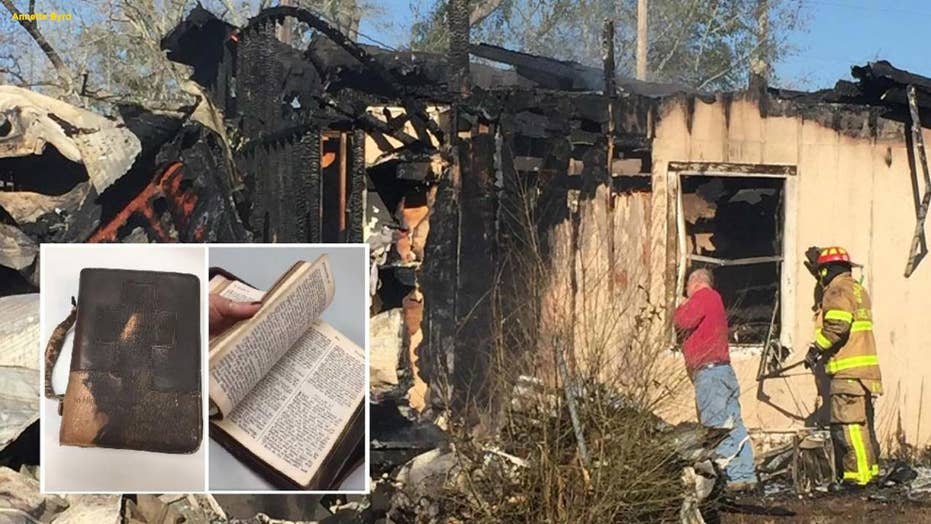 An Alabama man is thanking God after his grandfather's Bible was untouched in a fire that completely destroyed his Bon Secour home.

A man who lives on the Gulf Coast of Alabama said it was a miracle and "sign from God" when his grandfather's Bible survived a Christmas tree fire that destroyed their home.

Byrd, a veteran and father of four, who had lived in the home for 20 years, lost everything. But one thing remained: the Bible.

'THANK YOU, JESUS': MAN'S TRUCK GOES UP IN FLAMES BUT BIBLE LEFT INSIDE WAS UNSCATHED

“The fireman actually came out [of the home] with tears in his eyes and he said, 'you’re not going to believe this, you’ve gotta come see it for yourself,'" Byrd told FOX 10. “This Bible did not have one scorch mark on it.”

The firefighter said it was as if someone had set the Bible on top of all the ashes and rubble.

For Byrd, the Bible -- which has a cross and the verse John 3:16 etched on the cover -- was another sign that God was working in their lives.

Firefighters were able to find a Bible in the wreckage but not much else after a fire destroyed a Bon Secour home in January. (Courtesy of Annette Byrd)

Byrd's daughter, Shelby, 7, is his "miracle baby." She was diagnosed with leukemia at 2 years old. At the time, doctors told them she had no hope after she went into a coma, but she woke up and today she is in remission.

The house caught on fire on Jan. 8, while the family was at Fishermen Baptist Church. Byrd's daughters, Shelby and Ashton, 4, were at a princess tea party when he came home to see the devastation.

A kitten died in the fire, but when firefighters were searching for their bulldog, they found the family Bible untouched.

Annette Byrd, Scot's sister, told Fox News the Good Book somehow was untouched by the flames and the water from the firefighters.

"The Bible was there. I could’ve taken it to church and kept up with the preacher," Annette said.

She started a fundraiser after the home was destroyed because Scot still owes $20,000 on the home and is looking to rebuild in the area.

The community donated clothes, school supplies, and beds for Byrd and his daughters.