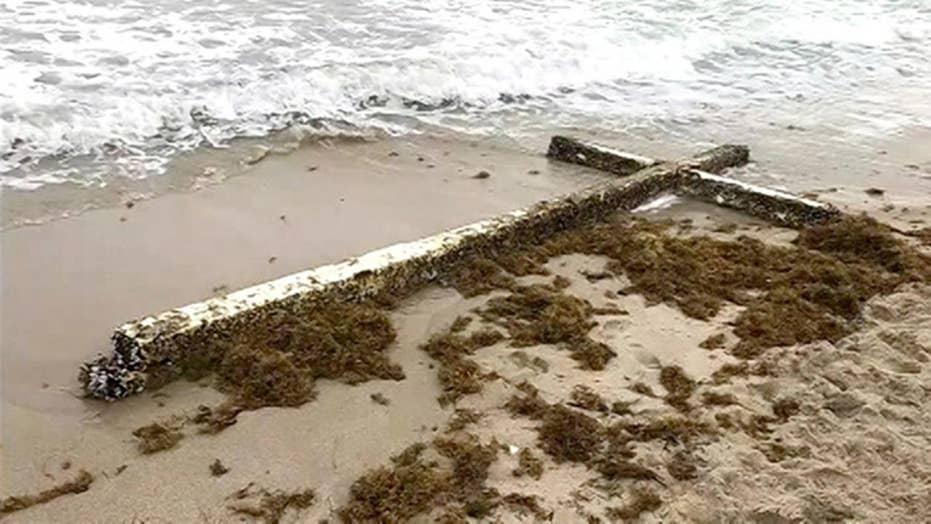 Fort Lauderdale beachgoers couldn't believe their eyes when they found themselves at the foot of a giant wooden cross that washed ashore Saturday afternoon. Some called it an answer to prayer, a sign, and "divine timing."

A Michigan family who had just checked into their hotel ran to the beach to enjoy the 70-plus-degree Florida weather. Instead, they found a holy symbol.

'HOLY COW': CATTLE FORM THE SIGN OF THE CROSS

"We stood there and just stared at it and each other for quite a few minutes in awe," Greg Gay told FOX 17. "We had noticed all the barnacles and knew it had been in the ocean for quite a while, so why would the sea finally cough it up at just that moment if it wasn’t meant for us to find it?"

Frank Talerico, the owner of the Ocean Manor Resort Hotel, where the family was staying, said the 20-foot cross that washed ashore is a sign of protection.

Beachgoers noted the barnacles on the 20-foot wooden cross that appeared on a Fort Lauderdale, Florida beach Saturday. The origin of the cross is unknown. (WSVN)

His sister was praying at the property earlier that day after having a bad dream. Then the giant cross appeared.

“You know what? I’m glad it’s here,” Talerico told FOX 13. “It’s staying here and if anybody wants to come see it or take a picture with it, they’re more than welcome.”

“We were just lying on the beach and we saw a crowd of people around and I just got up to see what was going on,” Smolinski told the South Florida Sun-Sentinel. “It was a cross that was laying right in the water.”

And while the cross sits on the beach for vacationers and locals alike to look at it, where it came from remains a mystery.

“People have suggested possibly Puerto Rico. Others have said the Keys,” local John Moschella told WSVN. “It’s really unknown where it has come from.”

Most believe it came from an island after a possible hurricane.