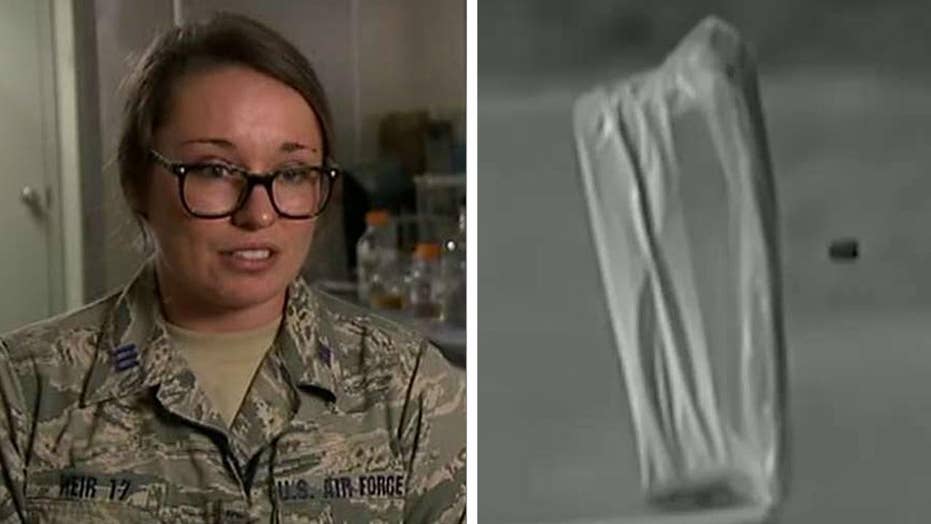 Air Force cadet Hayley Weir had an idea that turned out to be a game changer. "It was just the concept of going out there and stopping a bullet with something that we had made in a chemistry lab."

"I said, 'I'm not really sure this is going to work, the body armor industry is a billion-plus-dollar industry," he noted.

Weir's idea was to combine anti-ballistic fabric with what's known as a shear thickening fluid to create a less heavy material to use in body armor. She demonstrated the principle to Burke by combining water and cornstarch in a container and asking the professor to jam his finger into the paste-like goo.

"I jam my finger right into this bowl, and I almost broke my finger! Hayley's laughing because I've got this finger that I'm shaking and I'm saying, 'You know, that's pretty impressive stuff.'"

Convinced, Ryan worked with Weir for several months in a small lab at the Air Force Adacemy in Colorado Springs. They were helped and advised by Dr. Jeff Owens, Senior Research Chemist at the Air Force Civil Engineer Center at Tyndall Air Force Base in Florida.

They tried combining several different ingredients to come up with the exact formula for the shear thickening fluid, and the correct way to layer it with ballistic fibers.

"The pieces are not new," Weir explains, "everything that we've used in there has been researched (before) in some capacity for ballistics protection."

They tested their combinations on the firing range, failing time and again, until one day their quarter-inch thick design repeatedly stopped a round fired from a 9mm handgun.

Weir and Ryan's excitement was tempered by the range safety officer who pulled his .44 Magnum and told them bluntly, "This will fail."

They realized they had hit on something special, that could potentially lighten the average 26-pound body armor kit worn by servicemen in the field by as much as two thirds.

"This is something that our competition doesn't have right now," Weir explained. "And with this advantage our soldiers, if they wear this body armor, will be able to move faster, run farther, jump higher."

Body armor for the military and first responders may not be the only thing that can be improved by the new fabric. It could possibly be used to reduce or replace the thick metal plates that protect military aircraft, tanks and other vehicles.

"And there's some significant gravity and weight behind that," Ryan said. "And what it could mean for people like my friends who are still active duty in the military, that are going downrange, serving overseas."

A patent for the as yet unnamed design is pending, and if money is ultimately made, the Air Force will share the profits with Weir, Ryan and Owens.

"It doesn't feel like it's that great of an achievement," Weir muses, "just because it's been something that we've enjoyed doing."

The Air Force believes it is definitely a great achievement. They are providing the newly graduated 2d Lt Weir with a full-ride scholarship to Clemson University, where she will earn her Master of Materials Science and Engineering, before returning to the Air Force to continue her work.