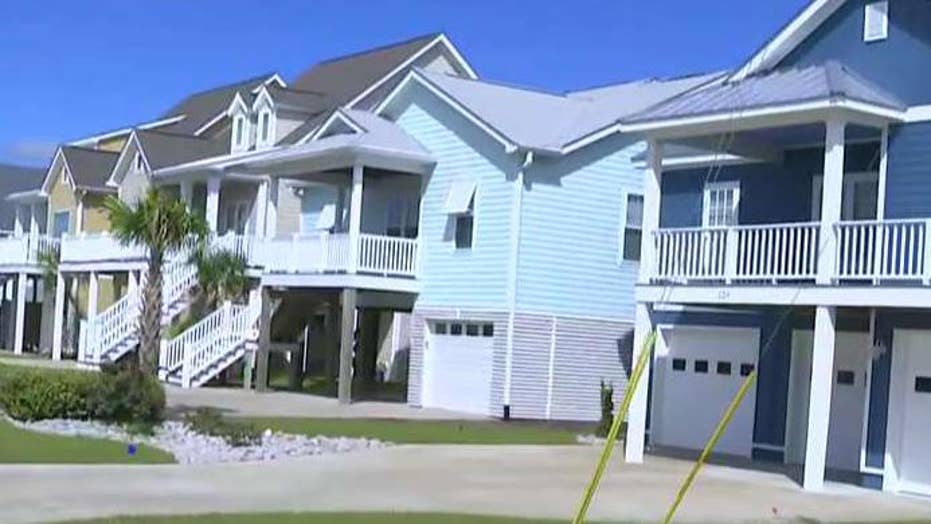 As Hurricane Florence continues its charge toward the southeastern U.S., mass evacuations have been ordered in North and South Carolina and Virginia.

Federal officials have urged those in the Category 3 storm’s projected path to leave and seek shelter. While still a few hundred miles from shore, Florence is expected to regain strength and turn back into a more potent Category 4 storm.

“Now is the time to finalize your plans to get out,” Joel Cline, a tropical program coordinator with the National Weather Service, told Fox News on Tuesday.

Factoring in potential catastrophic storm surges, devastating flooding and mudslides and a potential loss of power for a long period of time, Cline stressed that the safest way to prepare for Florence along the coast was to heed evacuation warnings.

But not everyone is heeding those calls – and getting out of harm’s way isn’t necessarily as easy as it might sound.

For Charleston native Joshua Walker, waiting out a hurricane is something he was “raised dealing with” in the Lowcountry of South Carolina. He has boarded up the windows at his house in downtown Charleston and prepared for possible flooding – something he says Charleston residents often deal with even when there’s not a hurricane – and plans to keep his bar, Wine & Company, open throughout the week.

Workers cover the windows of the historic Charleston County Courthouse in Charleston, S.C., in preparation for the advancing Hurricane Florence. (AP Photo/Mic Smith)

“We don’t want people to be crazy or dangerous, but when the storm’s not crushing the city, we’re going to be open,” Walker told Fox News.

Wine & Company, he said, is situated on higher ground and is equipped with hurricane windows and generators.

“We talk about the physical impact, but there’s a lot of psychological weight to sitting in a powerless house for three days,” Walker said. “It’s nice to have a break, to have a sense of community and see other people.”

But for April Ellis, the decision on how to proceed was a financial one. Along with her son, fiancé and pets, Ellis lives in Goose Creek, South Carolina – about 15 miles inland from Charleston.

“We talk about the physical impact [of hurricanes], but there’s a lot of psychological weight to sitting in a powerless house for three days.”

Both Ellis, who works in retail, and her fiancé, a contractor, are required to return to work as soon as the emergency is lifted, otherwise they won’t get paid, she told Fox News.

“Being a family on a budget with a 15-year-old son and two animals, evacuating for a storm, it’s like going on a mini-vacation; it requires money that we just don’t have,” Ellis said.

Those concerns were echoed by Nicklaus Cox of Georgetown, South Carolina, about 30 miles south of Myrtle Beach. Cox’s mother is an emergency room nurse who will need to work this week, and the family decided not to leave without her.

Cox pointed out, “Without knowing the extent of damage the hurricane could cause, we couldn’t afford to stay in a hotel for a long period of time should it come to that.”

“Without knowing the extent of damage the hurricane could cause, we couldn’t afford to stay in a hotel for a long period of time should it come to that.”

“If the damage is bad enough … all those who evacuate will not be allowed to come back into the area until it is deemed safe by local authorities,” Cox told Fox News. “Who knows how long that could take?”

As for Gordon Reddicks, a 74-year-old store owner in Wilmington, North Carolina, he said he’s been through so many hurricanes already, that he plans to wait this one out. He has already “prepared for the worst” the storm could bring.

“After this many, it doesn’t bother me. I’ll drink a few beers, relax, go to sleep, wake up, watch a little TV,” Reddicks told The Greenville News. “What are you going to do? This is part of it.”

The process of evacuating has caused problems for some.

By Wednesday morning, more than 624 flights had been canceled across the U.S., and nearly 5,600 were delayed. Additionally, some 429 flights scheduled for Thursday were already grounded, as well as nearly 100 for Friday.

Raleigh-Durham Charlotte Douglas  and Charleston International Airports are among the hubs primarily affected by Florence. Charleston’s airport said it expected to close runways by midnight Wednesday.

Michelle Stober loaded up her valuables Tuesday at her home on Wrightsville Beach to drive back to her primary residence in Cary, North Carolina. But finding fuel for her trip was difficult.

She told The Associated Press that she drove for an hour trying to find gas in Cary but “everyone was sold out.”