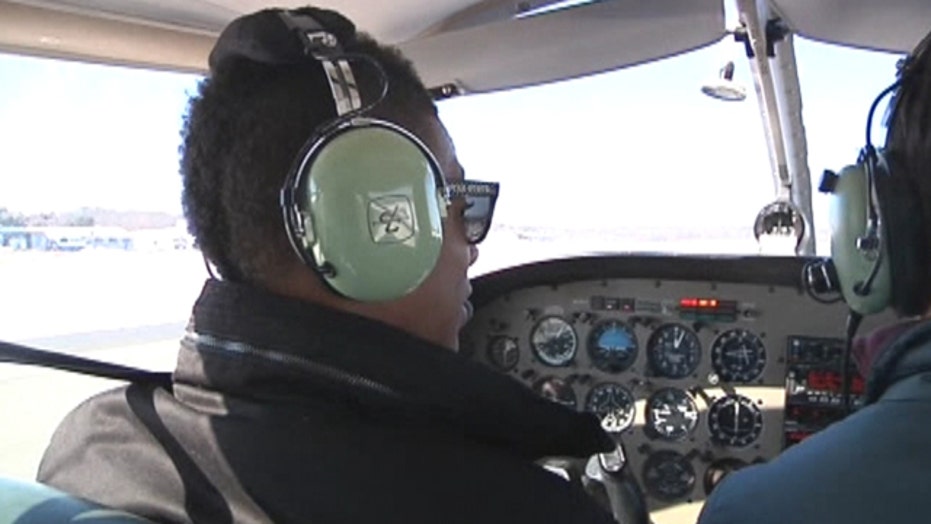 Program helps disadvantaged teens 'Rise Above It All'

It's not the way a typical teenager spends a Friday afternoon, testing fuel levels on a small four-seat plane, but 17-year-old Yves Bellevue of Boston is among the first in a program that aims to help disadvantaged teens or kids fighting illness to 'rise above it all'.

As he rolls down the runway, hands on the controls, Bellevue is given an enormous amount of responsibility and the opportunity to soar.

"It feels amazing actually, being up in the air," Bellevue told Fox News. "It feels like you're weightless and it's really fun."

Above the Clouds is a Massachusetts-based non-profit founded just over a year ago by lawyer and pilot Gary Oberstein.

"I became a pilot nine years ago when my wife gave me a little joy ride here at the airport for my birthday and a few years later I started flying charity flights for benefits, for galas," said Oberstein.

At one of the benefit events someone who bid on and won his services donated the flights back to the charity.

"So I flew with these kids- two wagonfulls of kids- and the joy that it brought to these kids who had never been outside of Boston before was really amazing and the idea eventually came that why not put together the love of flying with an interest in helping kids who are one way or another facing some kind of adversity," said Oberstein.

The Above the Clouds mission is to bring joy and hope through the wonder of flight. Volunteer pilots have taken more than two dozen seriously ill children for rides so far, taking off from the Norwood Memorial Airport in Norwood, Massachusetts. The kids are called "Dream Flyers."

"They're going to sit in the copilot's seat and they're actually going to fly the plane," said Oberstein. "These are kids who've been very, very sick... through very, very tough times and they haven't experienced much joy in their lives for a long time."

Another part of the program focuses on "Cadet Flyers"- teenagers, like Bellevue, who aim to learn and earn their way to a solo flight.

"The best part is when they're actually taking off in the program they're thinking, 'well, if I can do this... then I can do anything, if I just work really hard and apply myself' and 'the sky is the limit' and that's really the pot of gold at the end of the runway," said Oberstein.

The drop-out rate in the Boston Public Schools is nearly 15%, but to be a Cadet Flyer you must go to class and do your homework. Bellevue lives with his single mom in the city and says the flight lessons have inspired him.

"This makes me want to have something definitely to do with planes," said Bellevue, "like either the Air Force or aerospace engineering to make better designs for planes."

The message from Above the Clouds is that despite adversity-- with hard work-- a bright future lies on the horizon.

For more information, check out: www.abovethecloudskids.org