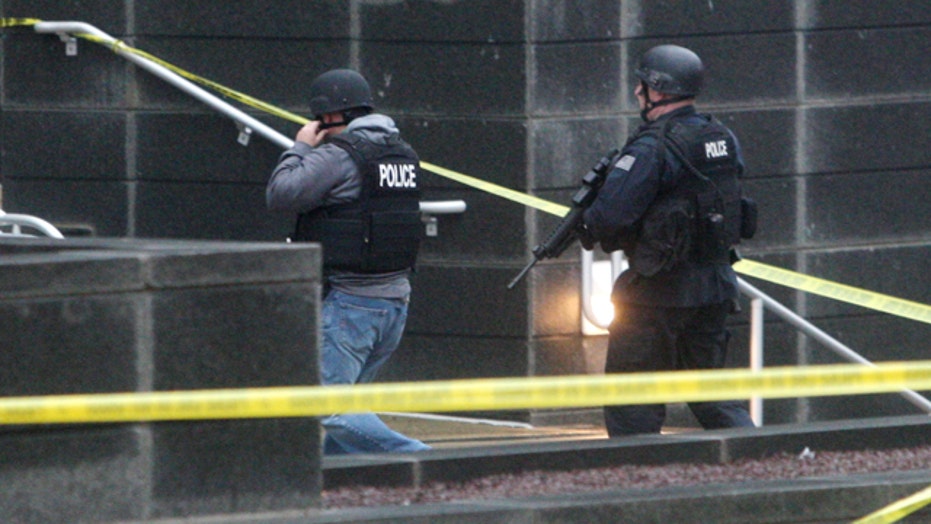 A suspected gunman and two women were killed after shots were fired inside a courthouse in Delaware, police say.

Wilmington police told Fox 29 that a man walked into the lobby of the New Castle County Courthouse on Monday morning and opened fire.

Shavack said police had not confirmed that one of the women was the shooter's estranged wife, though earlier in the day the city's mayor said that was the case. Two police officers suffered injuries that were not life threatening.

A law enforcement source told Fox 29 that the suspect is David Matusiewicz, who is in his 40s and is a father of four children. He was on federal parole and was due in court for a child support modification hearing. The father of the suspect was taken into custody.

Delaware's Attorney General, Beau Biden, said the shooting was not a random act of violence, but happened as the result of the ongoing custody dispute that has played out throughout the state's court systems the past several years.

"Our thoughts and prayers right now are with the victims of this senseless violence and the Capitol Police officers who put their lives on the line to protect the courts and public every day," he said in a statement.

After the shooting, the building was put on lockdown as SWAT teams cleared floors, Fox 29 reports. Several people were taken for treatment to a local hospital with unknown injuries.

Jose Beltran, 53, a court employee who works in the building, was entering the lobby Monday morning when he heard two shots. He said he turned around and ran.

"It happened so fast," he said, adding he heard three or more shots as he ran.

Dick Lawyer works across the street at the law office of Casarino, Christman, Shalk, Ransom & Doss and said his office building had been on lockdown since about 8:15 a.m. The shooting occurred about five minutes earlier. He said he and colleagues were shaken at first, but calmer hours later. "We have a couple of people whose relatives work at the courthouse," he said.