Prosecutors in California have decided not to charge two police officers who fatally shot an unarmed black man last year, saying the “shooting was lawful.”

Sacramento County District Attorney Marie Schubert announced on Saturday that Officers Terrance Mercadal and Jared Robinet would not face criminal charges in the March 18 death of Stephon Clark after an independent review of the case found that the pair used lethal force lawfully.

The 61-page review conducted by the prosecutor's office stated that  Mercadal and Robinet “had honest and reasonable belief that they were in imminent danger of death or great bodily injury.”

Schubert said the decision "does not diminish in any way the tragedy, the anger and the frustration that we heard since the time of his death."

She added: "We cannot ignore that there is rage within our community."

Reaction to the decision came swiftly on Saturday. Among the first to weigh in was Clark's mother, Sequette, who refused to accept prosecutors' judgment. "They executed my son," she said, according to The Associated Press. "It's not right."

Also on Saturday, Gov. Gavin Newsom and civil rights activists called for criminal justice reforms concerning use of deadly force. Newsom called it a hard truth that "our criminal justice system treats young black and Latino men and women differently than their white counterparts. That must change."

How the community at large will react to prosecutors' decision remained an open question early Saturday evening, though Sacramento has been bracing for protests; business owners were warned by a business association and state government workers told by legislative officials in recent days to stay away from downtown at least through the weekend.

Clark was shot and killed March 18;  the two officers were responding to a report of somebody breaking car windows. Police said they believed Clark was the suspect, and that he ran when a police helicopter responded and failed to obey officers’ orders.

Police said they thought Clark was holding a gun when he moved toward them with his arms extended and an object in his hands. He was later found to only have a cellphone on him. 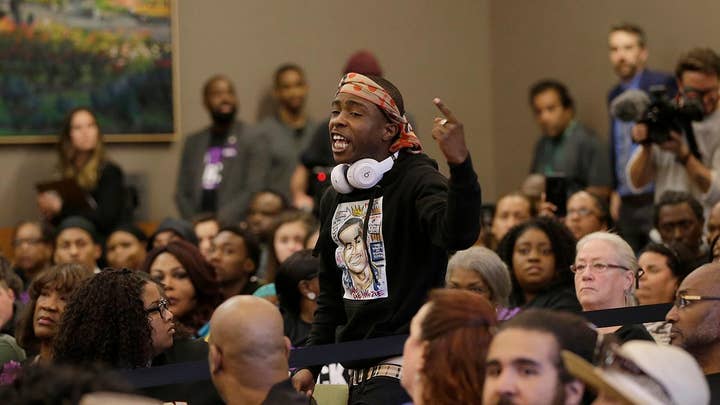 Police video of the shooting does not clearly capture all that happened after Clark ran into his grandmother's backyard.

It showed him initially moving toward the officers, who were peeking out from behind a corner of the house, but it's not clear whether he was facing them or that he knew the officers were there when they opened fire after shouting "gun, gun, gun." The video showed Clark staggering sideways and falling on his stomach as the officers continued shooting.

OUTRAGE GROWS OVER POLICE KILLING OF STEPHON CLARK IN SACRAMENTO: ‘20 SHOTS OVER A CELLPHONE’

A review of the district attorney’s findings stated that “the law recognizes an inherent right to use deadly force to protect oneself or others from death or great bodily harm.”

Claudia Cowan reports from California, where protesters are calling on prosecutors to file criminal charges against officers involved in the fatal shooting of Stephon Clark.

Clark's family, including his two sons, his parents and his grandparents, filed a wrongful-death lawsuit in January seeking more than $20 million from the city, Mercadal and Robinet. The suit alleges that the use of force was excessive, and that Clark was a victim of racial profiling.

One of the officers who shot Clark is black and the other is white, police said.