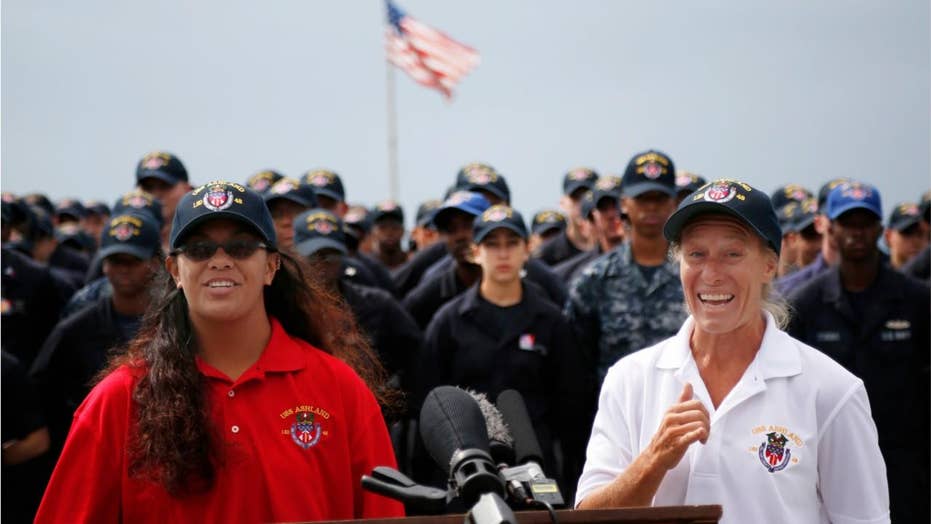 Women lost at sea for months planning next boating vacation

Last week Jennifer Appel and Tasha Fuiava were rescued from their storm-battered sailboat after being lost at sea for five months but are already planning their next boating vacation.

Two women from Hawaii say they’re already planning their next boat trip despite being lost at sea for the last five months.

Only five days ago, Jennifer Appel and Tasha Fuiava were rescued from their storm-battered sailboat after being discovered adrift by a Taiwanese fishing crew about 900 miles southeast of Japan, the Associated Press reported.

A U.S. Navy ship later retrieved the two women and transported them to the White Beach Naval Facility in Okinawa.

“When I saw the gray ship on the horizon, I was just shaking,” Appel said upon arriving in Okinawa, according to the New York Post. “I was ready to cry, I was so happy. I knew we were going to live.”

But even after the ordeal, the women are reportedly planning to set out again next year in the hopes of touring the destinations they were unable to visit this time around, NBC News reported.

Fuiava, Appel and their two dogs were rescued by the USS Ashland months after their boat became adrift in the Pacific. (Associated Press)

“We still never got to see the 20,000 islands [of the South Pacific], so I think that would be the most fantastic trip for May of next spring,” Appel said.

Appel and Fuiava — along with their two dogs, Zeus and Valentine — had originally set out in May from Honolulu, with plans for an 18-day voyage to Tahiti.

Along the way, however, the engine failed and their mast sustained damage, leaving them drifting aimlessly in the Pacific. The women said they hoped a friend and frequent deep-sea fisherman might be able to hear their distress calls or see their emergency flares.

At one point, the two say they were only a little over 700 miles from Oahu, but couldn’t make it back to Hawaii.

They spent the next three months drifting until the Taiwanese fishing vessel spotted them and attempted to tow their sailboat. When that didn’t work, Appel used a surfboard to paddle to their vessel and call for help.

The USS Ashland, which was only about 100 miles away, was dispatched to help. Upon arriving, Cmdr. Steve Wasson said the women’s boat was too damaged to repair, and brought them aboard instead.

The USS Ashland, which was only about 100 miles away, was dispatched to retrieve the women. (Associated Press)

The women say their dogs, Zeus and Valentine, helped to keep them going during the months-long ordeal. (Associated Press)

At the time of their rescue, the women say they had already exhausted 90 percent of their supplies, despite bringing enough for about six months. Their 50-foot sailboat — named The Sea Nymph — was abandoned in the Pacific.

Appel and Fuiava, however, have since said they would like to rebuild the Sea Nymph if it’s ever found. If not, they’ll set out on another “unsinkable” boat, equipped with the “knowledge that we’ve acquired during these months.”

Appel and Fuiava have also admitted that they were not prepared for the journey they set out to take. Fuiava was an amateur sailor, and Appel had about a decade of experience sailing the Hawaiian islands.

“Had [the USS Ashland] not been able to locate us, we would have been dead within 24 hours,” Appel told reporters in Okinawa, adding that they were both extremely grateful for the men and women of the USS Ashland.