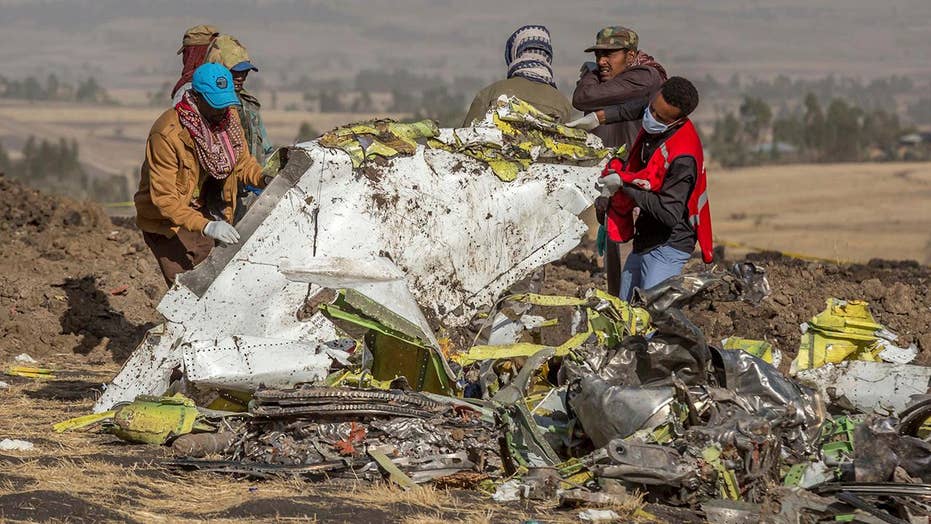 All 157 passengers on board, including 8 Americans, were killed when the Boeing 737 Max 8 plane crashed after takeoff in Ethiopia; Trey Yingst has the latest in the investigation.

The Federal Aviation Authority, as well as at least two major U.S. airlines, have not announced any plans to ground Boeing 737 Max 8 planes following the crash of Ethiopian Airlines Flight 302, and amid reports of aviation authorities in China, Indonesia and Ethiopian Airlines taking the aircraft out of service.

“The FAA is closely monitoring developments in the Ethiopian Flight 302 crash early this morning,” the agency confirmed Sunday in a statement. “We are in contact with the State Department and plan to join the NTSB in its assistance with Ethiopian civil aviation authorities to investigate the crash.”

In an updated statement shared Monday afternoon, the FAA said they are "collecting data" and issuing "Continued Airworthiness Notifications" for Boeing 737 MAX operators.

Boeing, which is based out of Chicago, has said it does not intend to issue any further guidance to customers, the Associated Press reported.

“Boeing is deeply saddened to learn of the passing of the passengers and crew on Ethiopian Airlines Flight 302, a 737 MAX 8 airplane,” the company wrote in a news release issued Sunday. “We extend our heartfelt sympathies to the families and loved ones of the passengers and crew on board and stand ready to support the Ethiopian Airlines team. A Boeing technical team will be traveling to the crash site to provide technical assistance under the direction of the Ethiopia Accident Investigation Bureau and U.S. National Transportation Safety Board.”

Carriers including Southwest and American Airlines have not confirmed operational changes but have vowed to follow investigations into the Ethiopian Airlines flight.

“Our heart goes out to the families and loved ones of the passengers and Employees on Ethiopian Airlines Flight 302,” Southwest wrote in an emailed statement to Fox News. “As Southwest operates a fleet of 34 Boeing 737 MAX 8 aircraft, we have been in contact with Boeing and will continue to stay close to the investigation as it progresses.

“We remain confident in the safety and airworthiness of our fleet of more than 750 Boeing aircraft.”

American Airlines also extended its condolences and has said it will “closely monitor” the investigation as it progresses.

"Our Flight, Flight Service, Tech Ops and Safety teams, along with the Allied Pilots Association (APA) and Association of Professional Flight Attendants (APFA), will closely monitor the investigation in Ethiopia, which is our standard protocol for any aircraft accident," the airline stated, in part.

"We have full confidence in the aircraft and our crew members, who are the best and most experienced in the industry," the statement read.

The specific model of Boeing plane – the Boeing 737 Max 8, which entered service in 2017 – was the same as that of the aircraft utilized by Lion Air Flight 610, which plunged into the Java Sea in October, killing all 189 aboard. But experts say the tragedies may not have much else in common.

"I do hope though that people will wait for the first results of the investigation instead of jumping to conclusions based on the very little facts that we know so far," Harro Ranter, founder of the Aviation Safety Network, told the Associated Press.

William Waldock, a professor of aviation safety, added that more info will hopefully come to light following an examination of the in-flight recorder, which was damaged but recovered from the site.

"We will see what we can retrieve from it,” one airline official told the AP.

Following that incident, Boeing had reportedly informed its customers of two switches in the cockpit which would have disabled the faulty safety feature, according to Bloomberg.

Ethiopian Airlines Flight 302 was carrying 157 passengers from at least 35 countries, at least eight of which were Americans.