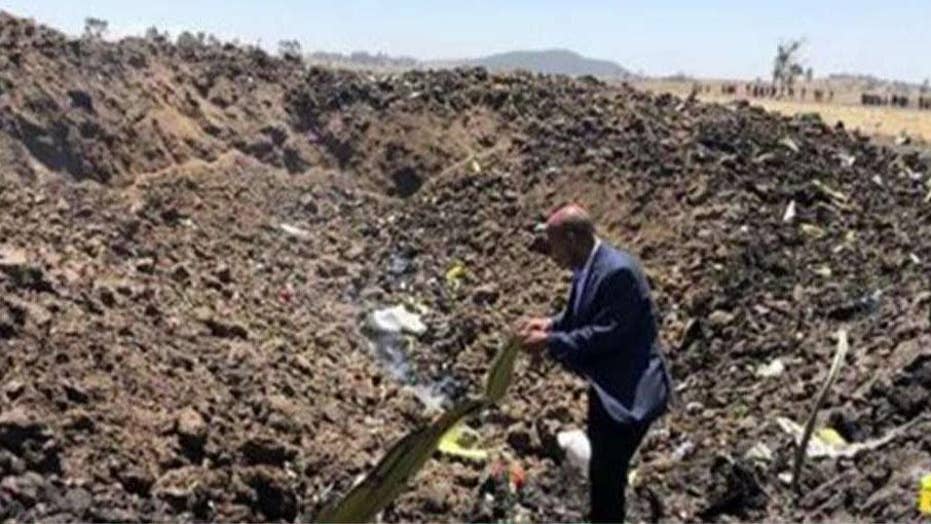 An Ethiopian Airlines flight crashed minutes after takeoff from Ethiopia’s capital on Sunday, killing all 157 people on board including some Americans, the airline and government officials said.

Ethiopian Airlines Flight 302 left Bole airport in Addis Ababa bound for Nairobi, Kenya, at 8:38 a.m. before losing contact with the control tower minutes later at 8:44 a.m. The crash occurred around Bishoftu, or Debre Zeit, some 31 miles south of Addis Ababa.

It was not immediately clear what caused the crash of the Boeing 737-8 MAX plane, which was new and had been delivered to the airline in November, according to records obtained by the Associated Press.The Ethiopian pilot sent out a distress call and was given clearance to return to the airport before the crash, the airline's CEO told reporters.

State broadcaster EBC reported all passengers were dead and that they included 33 nationalities. Kenya's transport minister said that 8 Americans were among the dead, as well as 18 Canadians, 8 each from China and Italy, 7 people each from France and Britain; 6 from Egypt; 5 from the Netherlands and 4 each from India and Slovakia.

Ethiopian Airlines posted a photo that showed its CEO standing amid the wreckage of the plane that crashed shortly after takeoff.

In this photo taken from the Ethiopian Airlines Facebook page, the CEO of Ethiopian Airlines, Tewolde Gebremariam, looks at the wreckage of the plane that crashed shortly after takeoff from Addis Ababa, Ethiopia, Sunday March 10, 2019. (Facebook via AP)

The airline's social media post said that "Tewolde Gebremariam, who is at the accident scene now, regrets to confirm that there are no survivors. He expressed his profound sympathy and condolences to the families and loved ones of passengers and crew who lost their lives in this tragic accident."

The State Department confirmed that Americans were among the among the dead.

"Our U.S. embassies in Addis Ababa and Nairobi are working with the Government of Ethiopia and Ethiopian Airlines to offer all possible assistance," the State Department said in a statement to Fox News. "The U.S. Department of State will contact directly the family members of U.S. citizens who died in the crash. ‎Out of respect for the privacy of the families, we won't have any additional comments about the victims. "

In this image taken from video, people stand around the crash site of an Ethiopian Airlines flight that crashed shortly after takeoff lies at the scene at Hejere near Bishoftu, or Debre Zeit, some 31 miles south of Addis Ababa, in Ethiopia Sunday, March 10, 2019. (AP Photo)

Worried families immediately began gathering at the airport Nairobi in the wake of the crash.

“We’re just waiting for my mum. We’re just hoping she took a different flight or was delayed. She’s not picking up her phone,” Wendy Otieno told Reuters as she was clutching her phone and weeping.

Agnes Muilu said she came to the airport to pick up her brother but was not yet told of anything.

"I just pray that he is safe or he was not on it,"  Muilu told the AP.

A family member of a victim involved in a plane crash talks on a mobile phone at Addis Ababa international airport Sunday, March 10, 2019. (AP Photo/Mulugeta Ayene)

Why are they taking us round and round, it is all over the news that the plane crashed," said Edwin Ong'undi, who had been waiting for his sister. "All we are asking for is information to know about their fate."

The Addis Ababa-Nairobi route links East Africa's two largest economic powers and is popular with tourists making their way to safari and other destinations, according to the AP.

“The office of the PM, on behalf of government and people of Ethiopia, would like to express its deepest condolences to the families that have lost their loved ones on Ethiopian Airlines Boeing 737 on regular scheduled flight to Nairobi, Kenya this morning,” the message said.

The state-owned Ethiopian Airlines, widely considered the best-managed airline in Africa, calls itself Africa's largest carrier and has ambitions of becoming the gateway to the continent. The airlines says on its website that it operates the "Youngest Fleet in Africa."

Records show that the plane was new. The Planespotters civil aviation database shows that the Boeing 737-8 MAX was delivered to Ethiopian Airlines in mid-November.

Ethiopian Airlines jets are shown parked at an airport. (Twitter)

In October, another Boeing 737-8 MAX plunged into the Java Sea just minutes after taking off from Jakarta, Indonesia's capital, killing all 189 people on board the Lion Air flight. In that crash, the cockpit data recorder showed that the jet's airspeed indicator had malfunctioned on its last four flights, though Lion Air initially claimed that problems with the aircraft had been fixed.

In a statement on Sunday, Boeing said it was "deeply saddened" to learn about the crash.

"We extend our heartfelt sympathies to the families and loved ones of the passengers and crew on board and stand ready to support the Ethiopian Airlines team," the statement said. "A Boeing technical team is prepared to provide technical assistance at the request and under the direction of the U.S. National Transportation Safety Board."

The Ethiopian Airlines flight crashed shortly after takeoff from Ethiopia's capital on Sunday morning, killing all 157 on board, authorities said, as grieving families rushed to airports in Addis Ababa and the destination, Nairobi. (AP Photo/Yidnek Kirubel)

The last deadly crash of an Ethiopian Airlines passenger plane was in 2010, when the plane crashed minutes after takeoff from Beirut, killing all 90 people on board, according to the AP.

Fox News' Kevin Kirby and the Associated Press contributed to this report.