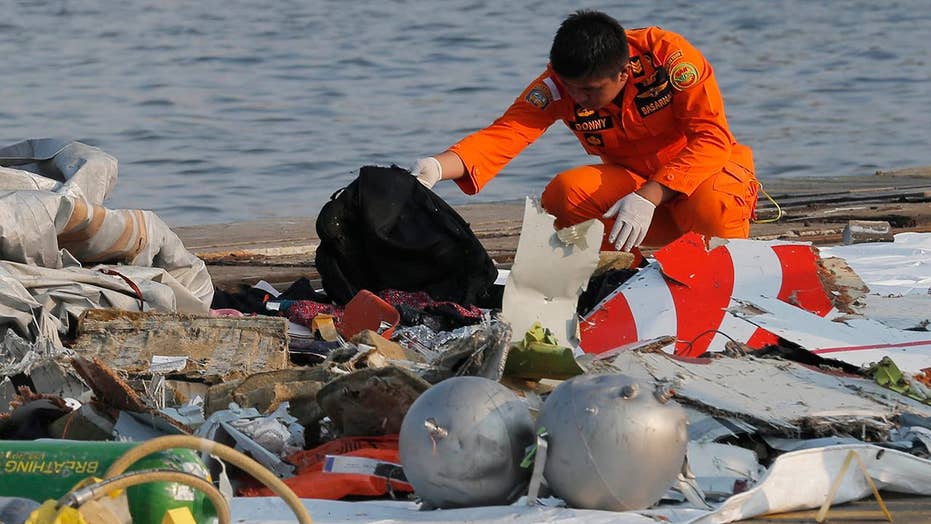 A brand-new jet airliner carrying 189 passengers and crew crashed into the sea shortly after takeoff from Indonesia's capital on Monday, prompting a major effort in the region that soon turned from rescue to recovery when officials disclosed there were likely no survivors.

The Lion Air Boeing 737 MAX-8 aircraft had just taken off from Jakarta when the pilot requested to return to the airport three minutes into the flight. Data for Lion Air's Flight 610 on aircraft tracking website FlightAware ends just a few minutes following takeoff, with the plane at an altitude of only 5,200 feet.

An air transport official, Novie Riyanto, told the Associated Press the flight was cleared to return to Jakarta after the pilot made a "return to base" request, but the flight plunged into the sea about 10 minutes later.

Emergency officials expect no survivors on Lion Air flight 610 that crashed into the sea shortly after takeoff from Jakarta.

After a massive search effort was launched, operation director Bambang Suryo Aji told reporters that officials are not expecting to find any survivors, Sky News reported.

"My prediction is that nobody survived because the victims that we found, their bodies were no longer intact and it's been hours so it is likely 189 people have died," he said.

There were 189 people on-board the plane, including crew. Among them were two children and a baby. A disaster agency spokesman posted photos of the debris including a crushed smartphone, books, bags, and parts of the aircraft fuselage that had been collected by search and rescue vessels.

In this photo released by Indonesian Disaster Mitigation Agency (BNPB) rescuers inspect debris believed to be from Lion Air passenger jet that crashed off West Java on Monday, Oct. 29, 2018. (BNPB via AP)

The National Search and Rescue Agency said about 300 people -- including soldiers, police, and local fisherman were involved in the search, and besides body parts that ID cards, personal belongings, and aircraft debris were also recovered.

Lion Air chief executive Edward Sirait said there was a "technical problem" with the plane on an earlier flight,  which had been fixed, according to Sky News.

In this photo released by Indonesian Disaster Mitigation Agency (BNPB) a rescuer inspects debris believed to be from a Lion Air passenger jet that crashed off West Java on Monday, Oct. 29, 2018. (BNPB via AP))

"It got repaired in Denpasar [in Bali] and then it was flown to Jakarta," he said. "Engineers in Jakarta received notes and did another repair before it took off on Monday. That's the normal procedure for any plane."

Feni, who uses a single name, told the AP her soon-to-be-married sister was on the flight, planning to meet relatives in Pangkal Pinang.

"We are here to find any information about my younger sister, her fiance, her in-law to be and a friend of them," said Feni.

Relatives of passengers comfort each other as they wait for news on a Lion Air plane that crashed off Java Island at Depati Amir Airport in Pangkal Pinang, Indonesia. (AP)

"We don't have any information," she said, as her father wiped tears from reddened eyes. "No one provided us with any information that we need. We're confused. We hope that our family is still alive."

The Boeing 737 Max 8 was delivered to Lion Air in mid-August and put in use within days, according to aviation website Flightradar24. Malindo Air, a Malaysian subsidiary of Jakarta-based Lion Air, was the first airline using the 737 Max 8 last year. The Max 8 replaced the similar 800 in the Chicago-based plane maker's product line.

Boeing Co. released a statement offering its "heartfelt sympathies" to the passengers' "families and loved ones." The Chicago-based manufacturer said it was prepared to provide technical assistance to search efforts.

The crash is Indonesia's worst airline disaster since AirAsia flight from Surabaya to Singapore plunged into the sea in December 2014, killing all 162 on board. Indonesian airlines were barred in 2007 from flying to Europe because of safety concerns, though several were allowed to resume services in the following decade. The ban was completely lifted in June this year. The U.S. lifted a decade-long ban in 2016.

On Monday, the European Commission said it had no immediate plans to ban Lion Air again, saying it will analyze the results of the investigation into the disaster.

PILOT IN CRASH THAT KILLED BRITISH FAMILY MAY HAVE BEEN KNOCKED UNCONSCIOUS BY PERSON TAKING PHOTO, REPORT SAYS

Australia's foreign affairs ministry, however, said that government officials and contractors "have been instructed not to fly on Lion Air or their subsidiary airlines" in the wake of the crash. "This decision will be reviewed when the findings of the crash investigation are clear," the agency said in a statement.

Lion Air is one of Indonesia's youngest and biggest airlines, flying to dozens of domestic and international destinations.

In 2013, one of its Boeing 737-800 jets missed the runway while landing on the resort island of Bali, crashing into the sea without causing any fatalities among the 108 people on board.