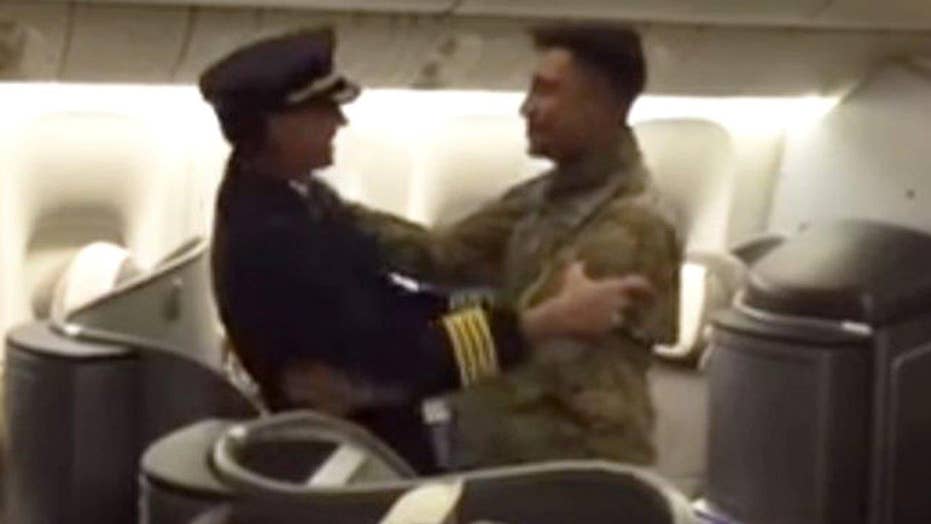 A United Airlines pilot pulled off the welcome home party of a lifetime by surprising his son returning to the U.S after a long deployment in Kuwait.

Captain Mario Lopes, who is based in the Washington, D.C. area, agreed to pilot a military-chartered flight on April 14, taking his son’s unit back to the states—and the young solider had no idea his father was in the cockpit.

A video of the moment Lopes surprises his son, First Lieutenant Mario Lopes, is now going viral with over 300,000 views.

“Very overwhelming,” pilot Mario Lopes told FOX 5 DC. “A lot of support from a lot of people. Apparently this video has made a lot of people cry. It made me cry.”

The flight crew and soldiers were all surprised and touched by the captain’s gesture. But the moment was extremely emotional for the reunited father and son.

“When I was hugging him, I did say welcome home, I love you and kissed him on the cheek and we just hugged for a few minutes,” the older Lopes recalls.

And he says his son starting tearing up right away.

“His eyes opened up like saucers and he was extremely surprised and we just embraced and hugged.”

Captain Lopes, who lives in Gainesville, Va., says that once he saw the opportunity to fly his son home he signed up right away.

“United was chartered to do a military charter,” the pilot said. “I happened to see it and was able to pick it up, so my wife and I kept that a surprise. We wanted to surprise him on his return home.”

First Lieutenant Mario Lopes is based at Fort Story in Virginia Beach. He had been serving in Kuwait for nine months. The surprise reunion happened in Frankfurt, Germany just before the plane took off.

Captain Lopes has been a United pilot for 40 years but he never thought he’d be able to pull off something quite this special.

Said the captain, "It's nice that something touches our hearts and we are all human and caring human beings.”