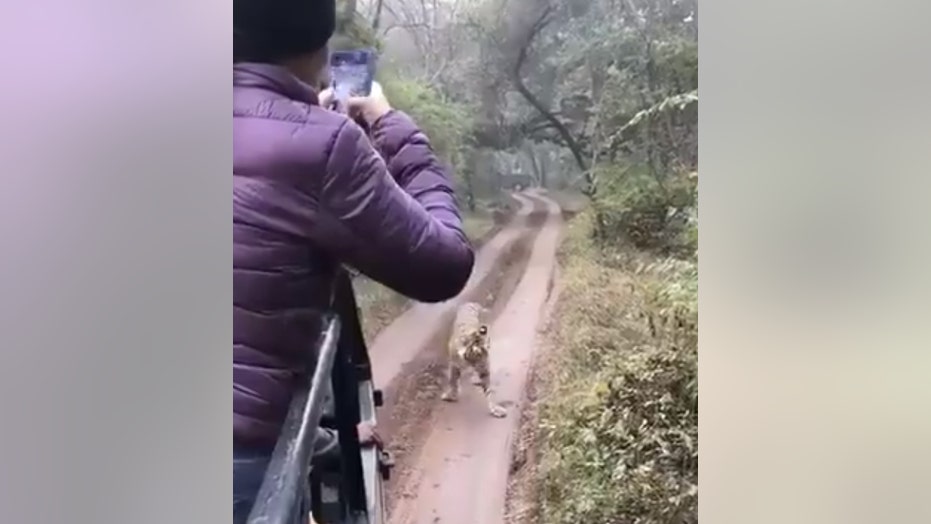 Well, it certainly made for a memorable trip, at least.

A group of tourists to India’s Ranthambore National Park were briefly chased by a tiger during a safari adventure through the nature reserve over the weekend, as seen in footage that has since gone viral on social media.

In the short video clip, the tigress, which was identified as Sultana by the Times of India, could be seen walking on a road in front of the group’s open-top safari vehicle while one of the tourists snaps a photo. The vehicle then backs up, only for the tiger to follow closely alongside.

Once the operator realizes the animal is chasing after the vehicle, the driver switches out of reverse and speeds forward. The tiger gives chase again, but stops after only a moment, disappearing into the brush.

The footage was believed to have been taken over the weekend in the reserve’s Zone 1 area.

"The tigress was possibly angry because it hadn't made a kill for some time due to a leg injury. In October, this tigress had suffered a thorn injury and disappeared for a while. It returned to Zone 1 just a few days ago. To maintain a safe distance from her, the driver might have revved up and driven faster than he should, angering Sultana further," claimed a source for the Times of India.

The tiger in the video was identified as a 3-year-old tigress named Sultana. (Newsflare)

The tigers at the reserve, which is located in Northern India, may also be under stress from increasing numbers and “human intervention,” according to India’s Network 18. The outlet reported a total of 71 tiger cubs among the reserve’s current population, despite Ranthambore being designed to “only handle 40.”

Ranthambore National Park was first established as a wildlife sanctuary in 1957 on the “former hunting grounds of the Maharajas of Jaipur,” according to its official website. After becoming part of India’s “Project Tiger” conservation efforts in 1974, the reserve was granted its status as a National Park in 1981.