The National Park Service is banning organized tours from visiting some of the Statue of Liberty’s most desirable outdoor locations as of May 16.

A report in Curbed New York says visitors to the iconic landmark will still be able to visit places covered by the new ban but must do so with via tours offered by the park service, not outside groups.

The ban will impact the statue’s outdoor observation deck and the Ellis Island Museum.

The news comes as the National Park Service prepares to unveil its new 26,000-square-foot Statue of Liberty Museum. (Getty Images)

The news comes as the National Park Service prepares to unveil its new 26,000-square-foot Statue of Liberty Museum.

The move was prompted by a desire to address mounting overcrowding at the Statute of Liberty and conflicts with National Park Service programming on both islands, park service spokesperson Jerry Willis told the New York Times.

“It has severely degraded the visitor experience in the park,” Willis said.

A staggering 5.2 million people visited the Big Apple in 2018. Tourist arrivals in the city have increased for nine straight years, Curbed reported.

All of those visitors are having a big impact on some of the city’s most popular attractions. In addition to the Statue of Liberty, New York City's famed Times Square is also becoming heavily crowded by visitors.

A yacht passes by Ellis Island as it makes its way through New York Harbor. (AP )

At the Statue of Liberty, about 250,000 people took commercial tours in 2018, which is about six times the number of people that did so 10 years ago.

About 4.5 million people visit the statue and Ellis Island Museum each year, and most of those people are on public tours, according to Curbed.

The park service said that the visitors who explore the landmarks as part commercial tours trigger a disproportionate amount of problems including obstructing traffic flow throughout the site. 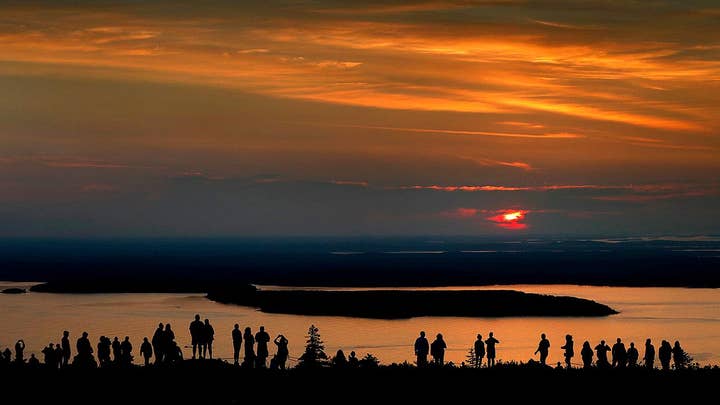 Commercial guides will not be banned from the iconic attractions altogether. They will still be allowed to lead tours outdoors, and will also still be allowed to access the statue’s lobby and mezzanine. But its famed observation deck will be off limits.