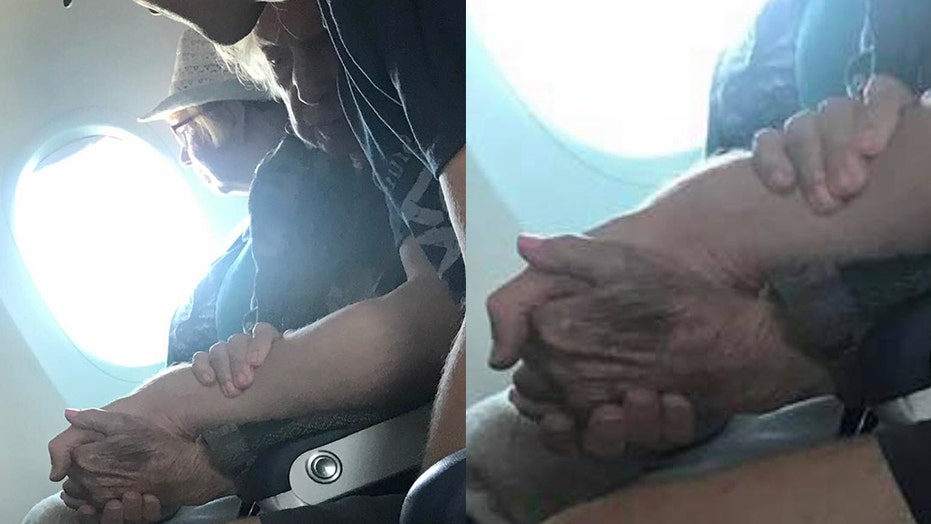 A man is being praised as a “flight angel” after comforting a 96-year-old woman who was nervous about flying by herself for the first time in 15 years.

The unidentified young man was seated next to the elderly woman, whom he didn’t know, on a Southwest Airlines flight from San Diego to Nashville last month.

According to nearby passenger Megan Ashley, who took photos of the pair and shared them on Facebook, the nonagenarian explained she was going to Kansas City for her birthday to visit her family – but was “scared of flying.”

“She asked for this man’s hand during takeoff and then hugged him again when experiencing turbulence,” Ashley captioned the photos.

“This gentleman I should say, gladly took her hand, let her hold onto him, calmed her by talking to her and explaining everything that was happening, and simply was that stranger there for her. He knew just what to do the entire flight to help,” Ashley continued.

A man is being praised as a “flight angel” after comforting a 96-year-old woman who was nervous about flying by herself for the first time in 15 years. (Megan Ashley)

The passenger also shared that the man went above and beyond even after the flight.

“He held her bag, helped her get off the plane and into the wheelchair, and when she got confused wondering where her daughter went (she called her her sister), he stayed with her until she caught up with her daughter who got separated from her,” she wrote. "This man was her flight angel."

“Hats off to you sir, for your kind heart and your compassion toward someone whom you’ve never met." (Megan Ashley)

Ashley said she walked away from the flight “sobbing happy tears” at the man’s selfless actions, adding that the older woman was also grateful and even offered him her “flight pretzels” to thank him for his help.

“Hats off to you sir, for your kind heart and your compassion toward someone whom you’ve never met,” she wrote in the caption.

Those on Facebook were equally touched by the sweet story, which has pulled in nearly 300K reactions on Facebook as of Friday afternoon.

The heartwarming moment went viral after being posted to Facebook last month. (iStock)

“We need more of this in the world,” another commented.

“Omg this is too sweet,” one wrote.

Even Southwest was amazed by the moment.

In a statement to Fox News, the airline said they are happy their customers had a “positive experience.”

“Civility is important to us at Southwest Airlines, and we are thrilled our Customers put it into practice onboard each day. We have the best Customers in the world and are constantly amazed by how they treat our People and each other,” the statement read.