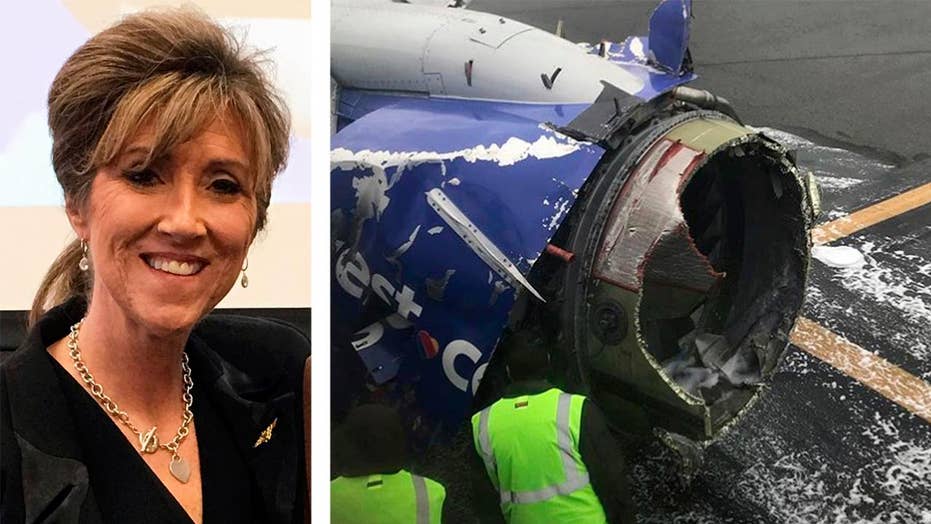 Southwest pilot and Navy veteran praised for nerves of steel

Pilot Tammie Jo Shults, who was previously a Navy fighter pilot, had to make an emergency landing after an engine explosion; Linda Maloney, a friend and former combat pilot, shares details on 'The Story.'

Some passengers aboard the harrowing Southwest Airlines flight forced to make an emergency landing earlier this week received thousands of dollars in compensation after one person was killed when one of the plane's engine exploded midair.

Southwest Airlines sent passengers who were on Flight 1380 a check for $5,000 in hopes the compensation would restore their confidence in the airline, Kamu Siwatu, a college professor who was on the flight, confirmed to Fox News on Friday.

"We value you as our customer and hope you will allow us another opportunity to restore your confidence in Southwest as the airline you can count on for your travel needs," the letter read. "In this spirit, we are sending you a check in the amount of $5,000 to cover any of your immediate financial needs.”

A National Transportation Safety Board investigator examines damage to the engine of the Southwest Airlines plane that made an emergency landing at Philadelphia International Airport. (NTSB via AP)

Passengers also received a $1,000 travel voucher, according to the letter. Those who accept the money did not appear to be precluded from taking legal action in the future or pursuing a further financial settlement.

“Ours is a company and culture built on relationships. We can confirm the communication and gesture are authentic and heartfelt,” the company said in a statement to Fox News.

One person, later identified as Jennifer Riordan, died and seven others were injured in Tuesday’s accident. The flight was heading from LaGuardia Airport in New York City to Dallas’ Love Field. The airliner had 144 passengers and five crew members on board.

A preliminary investigation into the accident found that a fan blade inside of the Boeing’s 737’s left engine snapped while the jet was flying at 500 mph above Pennsylvania.

HERO SOUTHWEST PILOT SPEAKS OUT: ‘WE WERE SIMPLY DOING OUR JOBS’

National Transportation Safety Board investigators examine a piece of debris from the plane that made an emergency landing Tuesday after a fatal engine mishap in Penn Township, Berks County, Pa. (Bill Uhrich/Reading Eagle via AP)

"This fan blade was broken right at the hub, and our preliminary examination of this was there is evidence of metal fatigue where the blade separated," National Transportation Safety Board Chairman Robert Sumwalt said at a news conference.

Investigators also found that the leading edge of the left wing was damaged by the shrapnel produced by the explosion, which killed Riordan.

"As Captain and First Officer of the Crew of five who worked to serve our Customers aboard Flight 1380 yesterday, we all feel we were simply doing our jobs," they said in a joint statement.