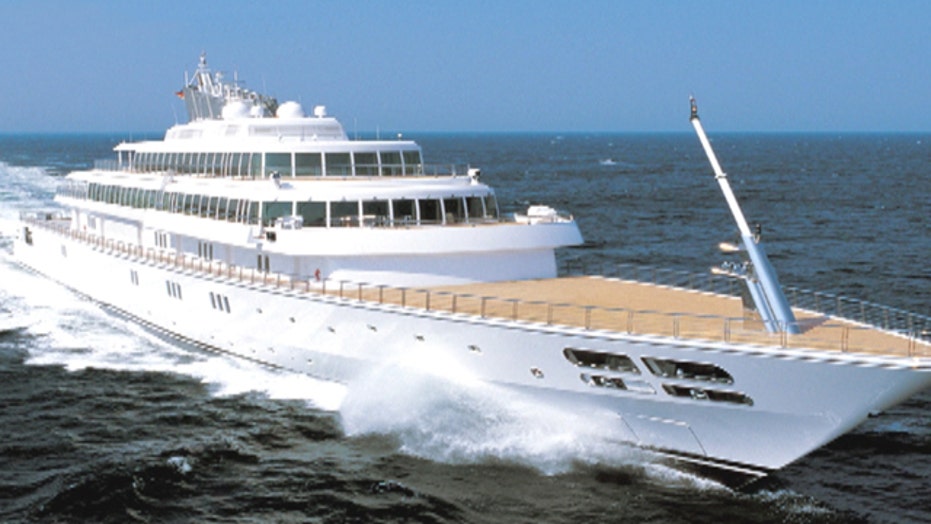 Battle of the super yachts

Billionaires battle for the title of world's biggest and most expensive super yachts.

Mansions, fancy cars, and private jets have always been must have status symbols for the super rich. Now you can add mega yachts to that list. And for their elite owners, bigger is always better.

Bigger--as in 590 feet or nearly the size of two football fields. That’s the length of the world’s largest private yacht, the Azzam. Built by the German shipbuilding company, Lurssen, the Azzam will be one of the fastest boats on the planet when it officially launches this fall. Its owner isn’t known, but it will reportedly be delivered to a member of the United Arab Emirate’s royal family when it’s completed. Insiders have estimated that the ship cost at least half a billion dollars to build, and that’s just for the structure.

By the time the very last doorknob is in place, Azzam’s price tag could climb to $1 billion dollars.

Before Azzam was unveiled in early April, Eclipse held the title for “world’s largest” – it’s an impressive 553 feet long. Because of its sheer size and mass – Eclipse weighs about 13,000 tons – the only place to dock the billion-dollar vessel in New York City is at a terminal used by cruise ships.

So what does $1 billion dollars buy you? If you’re Russian oligarch Roman Abramovich, the owner of the Eclipse, it buys you a disco, a hair salon, two heli-pads, a mini-submarine, room on board for a crew of 70, and a German built missile defense system.

Merjin de Waard, editor of SuperYachtTimes.com, says access to those types of luxuries is just one of the reasons why the super-rich need a ship that large. He also lists “privacy, more guest accommodation” and of course, “status.”

If status is everything, then the Rising Sun ranks right up there. Now owned by media mogul David Geffen, the Rising Sun was the world’s largest private yacht until Eclipse assumed the throne in 2010. In just three years, it’s tumbled down the list to number 10.

Rising Sun is still pretty impressive. With a reported 82 rooms, it has all of the amenities expected in a billionaire’s floating lair: a wine cellar, gym and sauna, private cinema, and a basketball court that doubles as a heli-pad.

According to de Waard, the demand for larger yachts (we're talking 100 feet and above) has declined over the past five years. But, the market for super-yachts – 500 feet or more – has actually continued to grow. Four out of the five world's largest yachts have been delivered in the past five years.

So why the sudden surge for such a top dollar luxury? de Waard says that Middle Eastern and Russian owners are trading up. “I think it is also a "normal" progression like your next house is probably going to be bigger than your previous house.”

Along with the established markets in the U.S., Russia, and the Middle East, the super-rich in South America and Asia are slowly buying into the trend.

“We have been in a financial crisis for the past five years now and there are still people with a lot of money who want to enjoy yachting and don't want to wait any longer with buying a new yacht.”

And, despite a shaky world economy, there’s no sign that the battle of the super-yachts will slow down any time soon. de Waard says there are at least 15 yachts almost 330 feet long under construction.