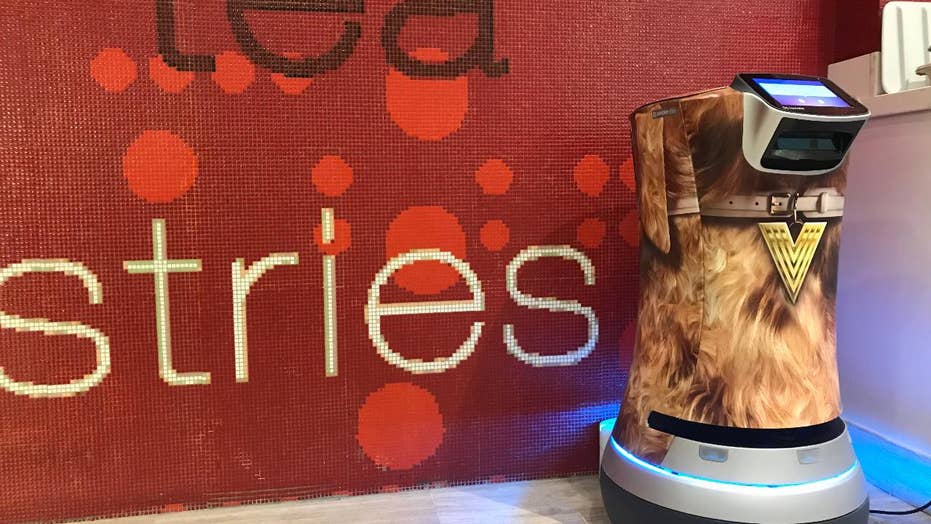 Las Vegas remains the national testing lab for the eccentric and over-the-top, and Sin City is staking that claim yet again with the introduction of “robot butlers" at the Vdara Hotel and Spa on the strip.

Fetch and Jett stand about three feet tall, and are fashioned like delivery people; guests can order items from the Vdara’s lobby café and have them delivered to their rooms in about ten minutes or less. Human attendants working at the café load the items into a receptacle in the robots' center console, and the bots then ride the elevators up to a guest’s room, delivering anything from snacks to toiletries to coffee.

Upon reaching the door, they'll even call the guests' rooms to announce their arrival. And then back in the lobby, they load into charging docks between errand runs.

The robots don't have arms, but wheel around the lobby, using Wi-Fi and 3-D cameras to navigate. They can prioritize multiple requests and wirelessly communicate with the hotel’s systems – even operating the elevators autonomously. Human attendants monitor their whereabouts through an app, but it's the guests who drive the experience.

Hotel executives say it's all about integrating the tech world with the hospitality aspect.

Silicon Valley-based tech company Savioke develops the relay robots, 70 of which can currently be found in approximately 60 hotels globally. There are even two others at the Renaissance Hotel off the strip, named “Elvis” and “Priscilla.”

But travel experts remain reluctant to call the robots a mainstay — at least not yet.

"I think the penetration of these robots hasn't quite hit a peak at all in any way," said Deanna Ting, a travel expert and reporter for Skift.com, a global travel industry website. "I think we're at sort of a stage where the robots seem to be like a novelty [rather] than necessarily an essential part of the hotel ecosystem."

WHY YOU MIGHT WANT TO THINK TWICE ABOUT THE HOTEL POOL

The robots are not glitch-free, and are therefore monitored 24/7. During a demonstration that Fox News observed, Fetch and Jett did experience delays and incorrect route configurations, but with any new tech, some of that is to be expected.

Earlier this year, Savioke detailed new features that their Relay robots could possess in the near future, including detecting faulty Wi-Fi hotspots (they depend on Wi-Fi to operate), acknowledging trash in rooms to be picked up, and having a social component interacting with guests through jokes and laughs.

The hospitality industry has increasingly welcomed new innovations in tech to add to the value of a guest’s experiences, however, concerns arise as to the proper role robots have in the industry. Will they replace human jobs or just act as sideshow substitutes to attract and entertain tourists?

The local Vegas culinary union, which represents over 50,000 hotel workers on the strip, recently voted in May to strike if hotels and casinos didn’t accept the terms of their demands for new contracts — one of which included addressing the growing problem of automation.

Ting acknowledges that guests still want that human interaction, and she doesn't foresee the robots as a solution for all the challenges in the hospitality experience.

"Nothing really replaces the genuine human hospitality that you experience at a hotel. That's why you go to a hotel, that's what you expect when you go into a hotel — a person who can intuit how you're really feeling and anticipate your needs and make you feel at home when you're on the road."