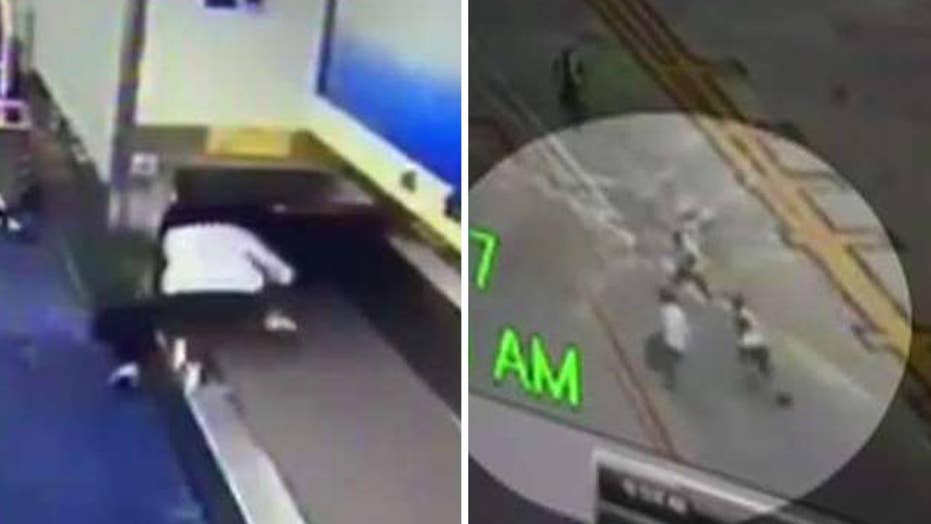 The man hopped on the carousel and into the luggage shoot.

A man at Miami International Airport successfully evaded airport security — for a few moments — by hopping on the baggage carousel and riding out to the tarmac.

According to The Miami Herald, officials are currently investigating Saturday’s incident, which reportedly took place near a security checkpoint behind an American Airlines ticket counter. In footage the Herald obtained from an anonymous source, the man can be seen walking behind the ticketing desk and diving onto the conveyor belt.

Subsequent footage shows the unidentified man sprinting across the tarmac as airport workers gave chase. He was quickly apprehended by airport staff, and later handcuffed by a police officer who arrived on the scene.

It is currently unknown whether the man was carrying a weapon, but the Herald’s source finds the incident “very concerning” either way.

“Had there been a plane at that gate, this individual could have entered the plane or had access to the aircraft. This is a very restricted area, only accessible to some with very limited access, and he was able to gain access,” said the source.

PASSENGERS HELD AT AIRPORT BECAUSE CUSTOMS OFFICIALS WERE LATE TO WORK

In a statement obtained by Fox News, American Airlines has commended the "quick actions of our colleagues in Miami who helped alleviate this security issue," though they directed any further inquiries to the Miami police.

Miami-Dade Police have yet to reveal the man’s identity, or whether he was a passenger or employee.

A representative for the Miami International Airport has further confirmed that the Department of Homeland Security's Immigration and Customs Enforcement is handling the case.