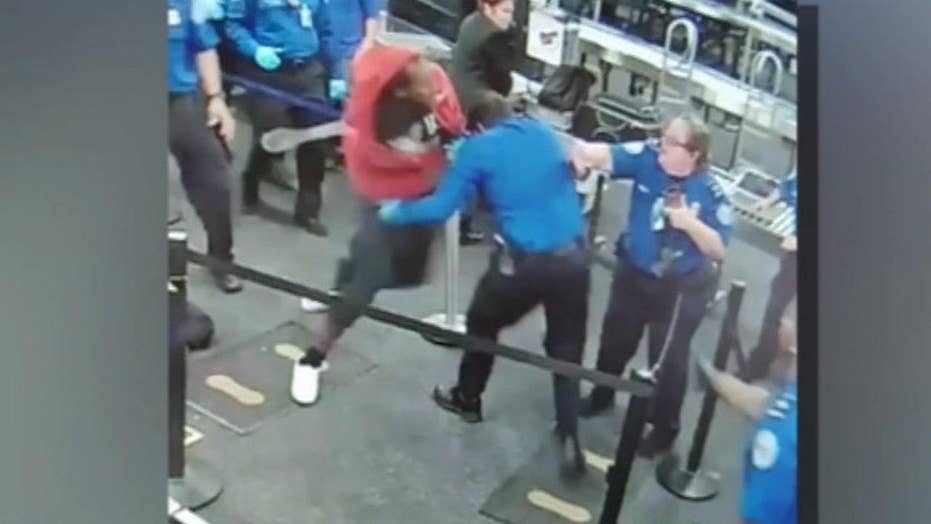 Newly released footage from Phoenix Sky Harbor International Airport shows a suspect, 19-year-old Tyrese Garner, attempting to rush through a security checkpoint and injuring five TSA officers in the process. Garner was soon subdued by the TSA and arrested by the Phoenix Police Department. He is being charged with suspicion of felony criminal trespassing, felony resisting arrest and five counts of misdemeanor assault.

Footage of a violent incident at the Phoenix Sky Harbor International Airport has emerged following reports of a security scare earlier this week.

Tyrese Garner, 19, was arrested on Tuesday morning after attempting to rush through a security checkpoint, injuring five Transportation Security Administration (TSA) officers in the process.

SEE IT: TRAVELER ATTEMPTED TO BRING THIS 11-INCH 'BATARANG' THROUGH SECURITY

Newly released footage shows the suspect, dressed in a red sweatshirt, barging through what appears to be a full-body scanner, knocking over a TSA officer and swinging at several others.

Footage taken at the Phoenix Sky Harbor International Airport shows the man bursting through the checkpoint.

Garner was soon subdued by the TSA officer and arrested by police with the Phoenix Police Department. Five officers were later treated for injuries sustained during the attack.

The 19-year-old, from Lubbock, Texas, was charged with suspicion of felony criminal trespassing, felony resisting arrest and five counts of misdemeanor assault, the Associated Press reported.

“This unprovoked and brazen physical attack against our TSOs is unacceptable," reads a TSA statement issued following the incident. "We are grateful for our committed workforce and for the role they play in protecting the traveling public every day. We continue to monitor the safety and health of the TSOs involved in this incident and will cooperate fully with the ongoing investigation.”

Court records obtained by The Arizona Republic indicate Garner may suffer from mental health issues. It’s possible he was also under the influence of drugs or alcohol, documents say.

He is being held at Maricopa County jail on a $1,500 bond and is scheduled to appear in court on June 25.

The Associated Press and Fox News' Louis Casiano contributed to this report.