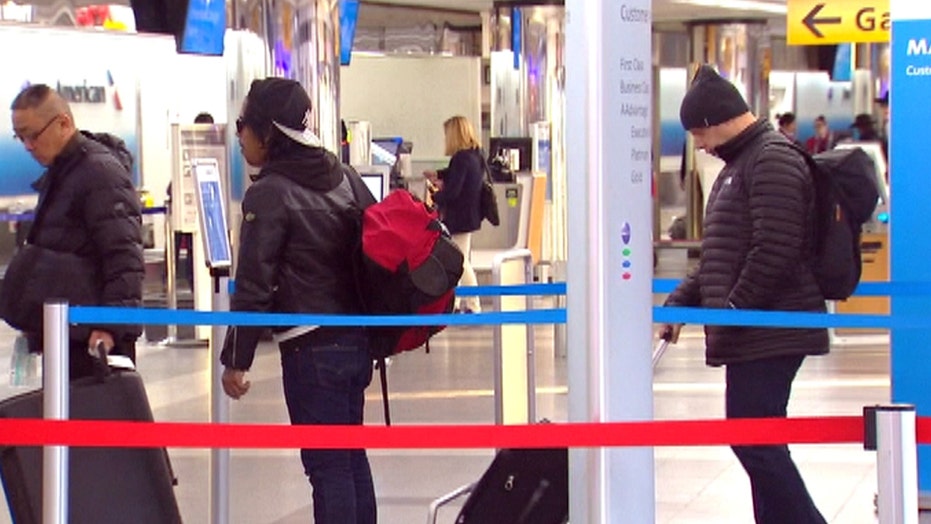 Over 5,000 flights delayed, cancelled ahead of snowstorm

Airlines are bracing for impacts from Winter Storm Jonas, which threatens to be a blockbuster snowstorm for parts of the mid-Atlantic and East Coast.

At least 5,000 domestic flights have been canceled or delayed Friday, according to the flight tracking site FlightAware, many of which are due to Jonas.

All major airlines have issued waivers for travel over the weekend, allowing passengers to rebook onto earlier or later flights to avoid the storms. A list of carriers and changes can be found here. FlightAware estimates airlines will cancel at least 2,000 flights Friday and another 3,000 Saturday.

Philadelphia International Airport announced via Twitter all Saturday flights will be canceled due to the winter storm.

By Sunday afternoon, however, the airlines hope to be back to full schedule.

The Washington Metropolitan Area Transit Authority (WMATA) announced Thursday that Metrorail, Metrobus and MetroAccess service will be suspended during the blizzard, according to a news release.

Amtrak is also modifying its schedule. Acela Express, Northeast Regional and other services operating between Virginia and Boston will run through the weekend, but passengers with reservations should keep a close eye on weather conditions and check their train status via Amtrak.com or through Amtrak’s mobile apps.  Travelers whose trains are affected by the schedule changes are being contacted and the hope is to accommodate them on trains with similar departure time or on offer than the option to travel on other days.

There’s a good chance your flight or train may be cancelled if you haven’t already received the dreaded automated call.

Here’s what travelers need to know.

Check the forecasts at your departure and arrival airports for any potential disruptions and follow airlines, trains or buses on Twitter for status updates.  Along with the National Weather Service, the Federal Aviation Administration’s (FAA) Air Traffic Control System Command Center website reports conditions at the top 23 major airports in the U.S. Air passengers can also check FlightAware.com for the latest information on delays and cancellations for specific itineraries. Many airlines allow you to opt into an email or text-based notification system. Use this tool to keep tabs on your flight.

If you’re at the airport when you’re flight is canceled, passengers will be scrambling for seats --and so should you. Don't expect the airline to get you on the next flight. Be proactive.  Call the airline's customer service number on your cell phone while waiting in line at the customer service desk in the terminal.  At the same time send your airline a message via Twitter.  If the airline doesn't have seats available on a later flight, or isn't booking anyone onto flights, try another airline. Many airlines have a policy that if they can't accommodate you, they will get you a seat on a competitor's flight without charge.

Know when it's time for a refund

If your flight is cancelled outright you are entitled to a full refund, even if the ticket was non-refundable. (If the flight you were booked on is merely delayed—but does take off eventually—the non-refundable rule still applies.) If you're hoping to buy a new ticket with your refund, be prepared to pay. If you bought your tickets at a super low fare during a sale, you would have to pay any difference between the amount you paid and the new fare at the time when you rebook your trip.

Make the best of it

Airlines typically don't provide vouchers for hotel rooms or food if a flight is canceled because of weather, but they may make an exception during a historic storm like this.  It never hurts to ask. Keep hotel apps, such as — Priceline.com or Hotel Tonight — on your smartphone to find a late minute place to stay, or check with your hotel reward program ahead of time to see if you can get a booking. If you're going to stay at the airport, consider purchasing airport lounge access if you don’t already have it. One-time passes for major carriers are around $50.  If you're main goal is to get rebooked, set up camp near the airline's customer service desk so you can see if there is a sudden flurry of activity.  This may mean the staff have permission to start booking stranded passengers onto flights. It's okay to check with the agents hourly to see if they have any updates--just do it with a smile and refer to the section below.

Keeping a cool head under stressful conditions is always the best way.  Bring a book or write in a journal to keep you occupied.  Also, make sure your chargers are handy to keep your phone or games juiced up.  When you engage with staff, do so with a smile on your face. If you're friendly and polite to the agents and stay within eyesight, they may even call you over when the snow is lifting and they're ready to fill seats.