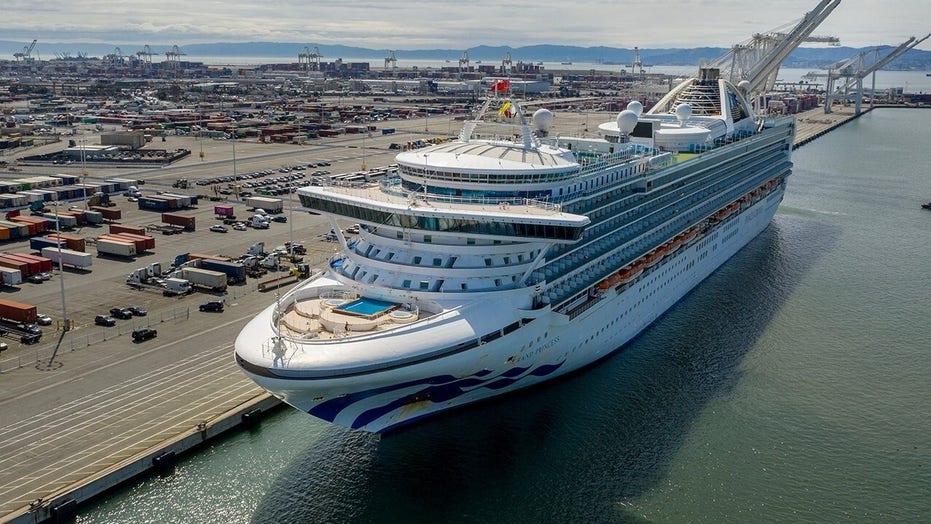 Cruise passengers continue to disembark from Grand Princess in Oakland

Two Grand Princess cruise passengers are suing the liner for $1 million over its handling of the ship's coronavirus outbreak, claiming they are now “at serious risk of imminent harm as a result of being exposed to the coronavirus running rampant aboard the cruise ship.”

Ronald and Eva Weissberger, who are reportedly still on the now docked ship, filed a complaint Monday in the United States District Court for the Central District of California in Los Angeles, seeking more than $1 million in damages from Princess Cruise Lines Ltd.

"[T]here are sixty-two passengers on board the Plaintiffs’ cruise, who were also on the prior voyage, who were exposed to the passengers that were confirmed to be infected, and later died."

In the lawsuit, the Broward County, Fla. couple accuse Princess Cruises of being negligent and not practicing necessary precautions, thus potentially exposing thousands of passengers onboard to coronavirus.

The Weissbergers boarded the Grand Princess on Feb. 21. In their lawsuit, the couple claims the cruise liner “had knowledge that at least one of its passengers from the prior voyage who disembarked Feb. 21, 2020 had symptoms of coronavirus, and yet it made the conscious decision to continue sailing the voyage…with another three thousand passengers on an infected ship.”

The lawsuit goes on to allege that Princess Cruises knew “at least two passengers who disembarked” from the previous voyage on Feb. 21 in San Francisco had symptoms, and sent emails on Feb. 25 to those who disembarked, warning of potential exposure while onboard.

“To make matters even worse, there are sixty-two passengers on board the Plaintiffs’ cruise, who were also on the prior voyage, who were exposed to the passengers that were confirmed to be infected, and later died,” the lawsuit states, referencing the ship's previous voyage, which at least 20 cases have been tied to, including the first person to die from the virus in California.

The lawsuit goes on to allege Princess Cruises knew “at least two passengers who disembarked” on Feb. 21 in San Francisco had symptoms. (iStock)

The lawsuit goes on to allege that despite the experience of the Diamond Princess — which had experienced a coronavirus outbreak three weeks prior resulting in 700 cases and seven deaths — the Grand Princess did not “have proper screening protocol in place to minimize the risk of exposure of the disease to its passenger and crew.” The ship “simply asked [passengers] to fill out a piece of paper confirming they were not sick.” None of the 62 passengers or crew members aboard the previous Grand Princess voyage were examined before boarding, the lawsuit further claims.

According to the plaintiffs, Princess Cruises continued to sail knowing other passengers and crew members had been exposed to COVID-19 on the previous voyage.

The lawsuit goes on to allege that passengers and crew were not warned of the potential exposure.

“Due to Defendant’s outright negligence in failing to warn Plaintiffs of the actual risk of exposure to COVID-19 aboard its infected ship, Plaintiffs are quarantined in their cabin along with the rest of the passengers and crew, off the coast of San Francisco, anxiously awaiting their fate,” the lawsuit says.

The couple is seeking a jury trial.

WHAT DOES IT MEAN TO SELF-QUARANTINE?

The Grand Princess cruise ship unloaded hundreds of passengers in Oakland, Calif., Monday after being held off the coast since last Wednesday with nearly two dozen coronavirus cases on board.

The ship — which was carrying 3,500 people — had been idle about 10 miles off the coast of Northern California. Some of the ship's passengers were seen waving from the balconies of the vessel upon arrival after being in isolation.

As of Tuesday, a representative for Princess Cruises told Fox News no additional people have tested positive other than the initial 21.