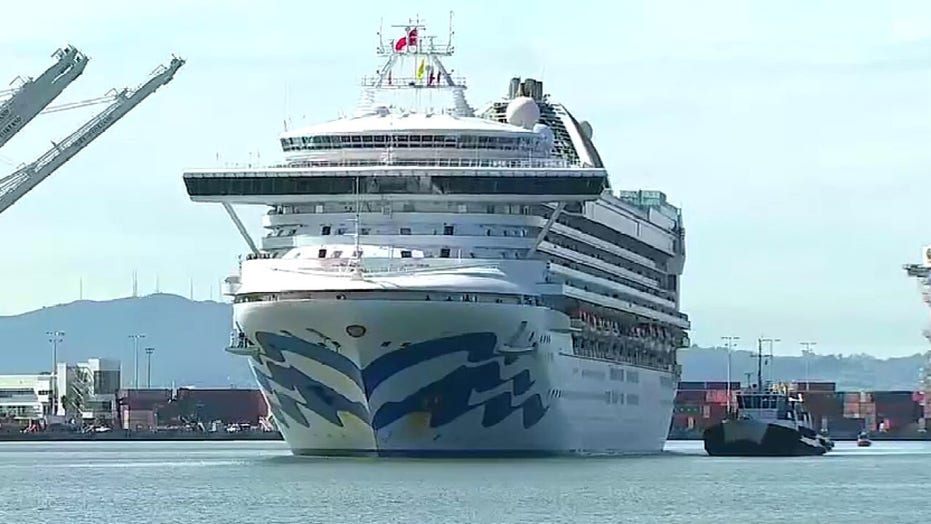 Grand Princess passenger on cruise ship's arrival in Oakland, California: A light at the end of the tunnel

At least 21 people have tested positive for coronavirus aboard the Grand Princess; Gina Pallotta and her husband boarded the cruise ship more than two weeks ago.

The Grand Princess cruise ship unloaded hundreds of passengers in California on Monday after being held off the coast since last Wednesday with nearly two dozens coronavirus cases on board.

At least 21 people were confirmed to be infected and 23 people were unloaded at the Port of Oakland in need of extreme medical attention.

“Our intent is to basically disembark about half the passengers today. Everyone will be screened initially today," said Robert Kadlec, assistant secretary of Health and Human Services Services.

The ship -- which was carrying 3,500 people -- had been idle about 10 miles off the coast of Northern California. Some of the ship's passengers were seen waving from the balconies of the vessel upon arrival after being in isolation.

Passenger aboard the Grand Princess celebrate as they arrive in Oakland, Calif., on Monday, March 9, 2020. The cruise ship, which had maintained a holding pattern off the coast for days, is carrying multiple people who tested positive for COVID-19, a disease caused by the new coronavirus. (AP Photo/Noah Berger)

It's not clear how many of the critically ill passengers tested positive for the virus, according to Brian Ferguson, a spokesman for the California Office of Emergency Services. Out of the roughly 1,100 crew members on the vessel -- 19 were infected.

The crew will be quarantined and treated on the ship, which will dock at another location after the more than 2,000 passengers disembark, according to California Gov. Gavin Newsom.

"We're going to be leaving the crew onboard the ship, although we're surging medical staff," Alex Azar, the U.S. Secretary of Health and Human Services told Fox News. "We already have put people on board the ship to isolate those individuals, [and] make sure appropriate isolation and quarantine is happening onboard."

U.S. passengers will be flown or taken by bus to military bases in California, Texas, and Georgia for additional testing and a mandatory 14-day quarantine. Over 1,000 passengers from California will be sent to nearby Travis Air Force Base. The ship was carrying people from 54 countries.

Tents stand on a wharf near the Grand Princess at the Port of Oakland in Oakland, Calif., Monday, March 9, 2020. The cruise ship, which had maintained a holding pattern off the coast for days, is carrying multiple people who tested positive for COVID-19, a disease caused by the new coronavirus. (AP Photo/Noah Berger)

Nearly 240 Canadians left the ship after the critically ill and were captured standing outside two tents with their country's flag.

Canada and the UK were planning on sending chartered flights to get their citizens.

The State Department warned against travel on cruise ships because of “increased risk of infection of COVID-19 in a cruise ship environment."

The Grand Princess had been held off the coast since Wednesday because of evidence that it was the breeding ground for more than 20 infections tied to a previous voyage.

The ship previously carried a passenger who was the first person to die in California.

The unloading will take about three days.