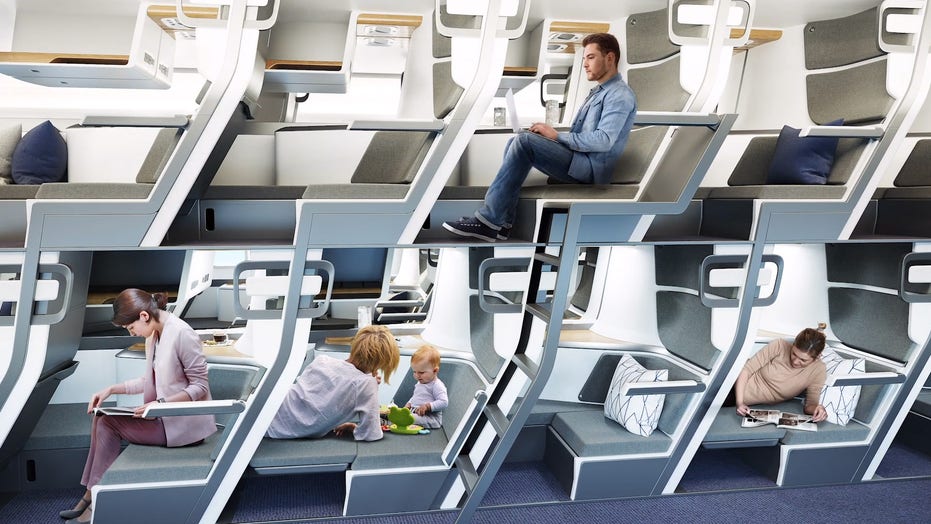 Flying amid the coronavirus pandemic is already posing its fair share of concerns for passengers — but one design firm is hoping to help us sleep through them.

Zephyr Aerospace, a San Francisco-based startup, has debuted a design for what it calls “the world’s first lie-flat double-decker seating concept,” claiming that it provides privacy, comfort and protection from other passengers in premium economy.

Jeffrey O'Neill, the founder of Zephyr Aeropace, tells Fox News that he first came up with the concept a few years back, on a 19-hour flight to Singapore.<br> (Zephyr Aerospace)

“The idea, still in the concept phase, could revolutionize the in-flight experience as airlines encourage people to travel again,” reads a press release for the concept.

According to Zephyr, these double-decker seats can be installed on existing wide-body aircraft in a 2-4-2 seating configuration. And by stacking the seating on top of each other, the company claims that airlines would still be able to fit the same density of passengers in their premium economy cabins.

Jeffrey O'Neill, the founder of Zephyr Aeropace, tells Fox News that he first came up with the concept a few years back, on a 19-hour flight to Singapore.

“I’m literally flying on the highest-rated airline in the world, but I couldn’t sleep. The seat would not in any way allow me to contort myself," he said. “I thought, 'Why should I have to suffer jetlag to enjoy the benefits of a non-stop flight… without drugging myself?'"

O'Neill soon developed the double-decker concept, which would allow for sitting, sleeping and privacy in basic economy, and even built his own prototype at a cost of roughly half a million dollars. He later presented the idea at an air show in Germany, where he tells Fox News the idea was met with interest from major airlines. Unfortunately, talks with those airlines have been paused amid the pandemic.

O'Neill believes, however, the design of his Zephyr seating was coincidentally designed to solve any problems with social distancing.

“There’s more of an immediate need for a compliant product … and this one seems to solve both of those problems. It’s compliant, but it also offers affordable comfort.”

As it stands, however, Zephyr is still waiting to move forward with clients. Even still, the company has made it clear that Zephyr Seats are still in a “concept phase.”

Zephyr, however, wouldn’t be the first design firm to propose new seating arrangements as a solution to social-distancing woes within the airline industry.

In April, an Italian company called AvioInteriors told Fox News that at least one “major” airline was interested in its two different proposals for aircraft seating — one that utilized similar shields between seats, and another that flipped the middle seat around entirely. And earlier this month, a technology company called Universal Movement teamed up with the aerospace manufacturers at Safran Seating to develop the “Interspace Lite,” which transforms an aircraft’s middle seat into a divider that not only separates passengers, but forces at least a bit of social distancing by eliminating the ability to sit in the middle seat entirely.