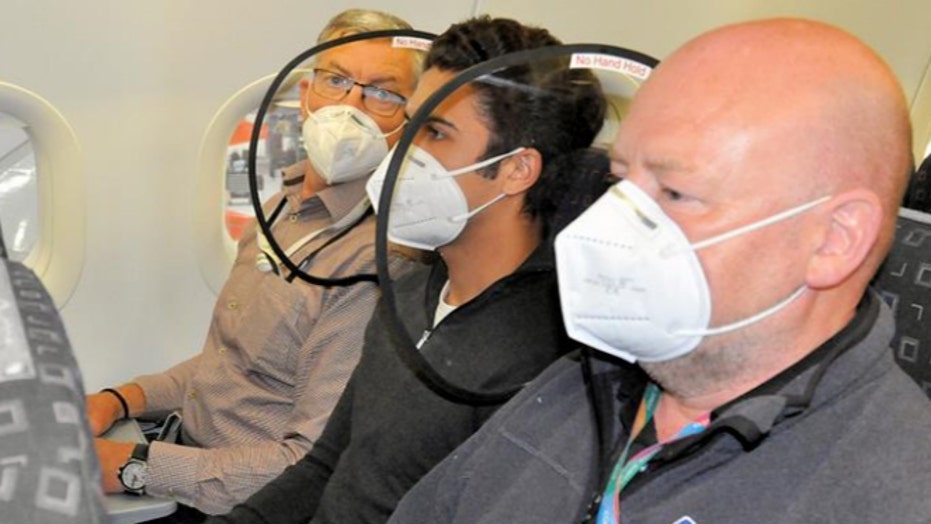 A spokesperson for RAS Completions, a British design firm specializing in aircraft interiors, tells Fox News that the company is seeing a “great deal of interest” in its new Personal Protection Windows, which are aimed at reducing the spread of coronavirus on airplanes.

The firm said its Personal Protection Windows, or PPW, are designed to prevent “direct lateral droplet transmission” between passengers in economy and premium-economy cabins, without sacrificing the middle seat, which is what many major airlines are resorting to (or at least intending to) amid the pandemic.

The company's design, called a "Personal Protection Window," is currently in the process of being reviewed by the European Union Aviation Safety Agency. (RAS Completions)

According to RAS Completions, its PPW is acceptable for “all types of aircraft,” as it consists of shields and straps that can be installed in about “one minute per seat place.”

The company’s idea, however, is still waiting on final approval from the European Union Aviation Safety Agency (EASA) before it gets off the ground.

Despite this, Roger Patron, the business development manager for RAS Completions, tells Fox News that its PPW are already being manufactured for at least one client.

“We have the first customer on board and the first set in production,” a representative for the company tells Fox News. (RAS Completions)

“We have the first customer on board and the first set in production,” Patron tells Fox News. “We are getting a great deal of interest from other airlines.”

RAS Completions isn’t the only design firm with big ideas for the future of flying. In April, an Italian company called AvioInteriors told Fox News that at least one “major” airline was interested in its two different proposals for aircraft seating — one that utilized similar shields between seats, and another that flipped the middle seat around entirely.

In April, AvioInteriors debuted its concept for "Janus" seating, which would consist of three adjacent seats, albeit with the middle seat situated in the opposite direction of the window and aisle seats. (AvioInteriors)

And earlier this month, a technology company called Universal Movement teamed up with the aerospace manufacturers at Safran Seating to develop the “Interspace Lite,” which transforms an aircraft’s middle seat into a divider that not only separates passengers, but forces at least a bit of social distancing by eliminating the ability to sit in the middle seat entirely.