While you’re strolling around Disney World on a hot day, debating which ride to check out next and munching the delicious foods you must try there, chances are you’re not swatting away mosquitoes. You might take it for granted — as it seems to be that there are no pesky blood-sucking bugs in the Most Magical Place on Earth.

But then when you start to think more about it, it gets perplexing. Disney World is in Florida, after all, a hot state filled with swampland. In fact, the area where the park is used to be nothing but swampland! So how is Disney World reportedly so mosquito-free?

Well, there’s no miraculous Disney-magic method that completely eliminates all bugs. Some bugs do still make it into the park because no technique can be 100 percent effective. But, by combining a few different methods of pest control, Disney can create a mostly pest-free park in the middle of swamp country. And most of the park’s pest control methods allegedly trace back to one man.

If you’ve taken the ferry from the Ticket and Transportation Center to the Magic Kingdom, you may have noticed the name “General Joe Potter” on one of the boats. MIT graduate and engineering expert Major General William “Joe” Potter met Walt Disney during the 1964 World’s Fair. Potter had previously served as governor of the Panama Canal Zone, an area ravaged by malaria-carrying mosquitoes.

According to Christoper Lucas, author of “Top Disney: 100 Top Ten Lists of the Best of Disney,” this was where Potter developed his extensive knowledge of pest control as one of the engineers fighting to control the swarms. As Potter and Disney talked at the World’s Fair, the former mentioned his background in controlling mosquitoes.

Disney “hired him on the spot” and put him in charge of keeping mosquitoes out of the expansive theme park he was planning on building in central Florida, Lucas says.

Disney’s methods aren’t to kill bugs but to prevent bugs from being in the park at all. So their methods target the larvae instead—they make the park a non-ideal environment for mosquitoes to live or lay their eggs. One of the ways they allegedly accomplish this is by making sure the park has no standing water—mosquitoes are attracted to still water and it’s an ideal environment for them to lay eggs.

“You [need to] get rid of their breeding ground, which is standing water,” Lucas explains.

But, as you can imagine, swamps are filled with standing water. So, when Potter got to work on construction for Disney World, he immediately set about building drainage ditches to remove all of the water, converting the swampy land to buildable land. And those ditches—nicknamed “Joe’s ditches”—are still used today, to keep all of the water in Disney parks constantly moving.

“The guests usually don’t notice it…but the water is constantly flowing,” Lucas says. “Whenever you walk by a body of water, there’s usually a fountain in the middle of it, or they’re doing something to keep it flowing.”

Whenever Disney prepares to build a new property, such as one of these best Disney resorts for a perfect family vacation, they buy a lot more land than the property itself requires, so that they can build drainage ditches to allow them to keep the water moving.

Disney’s buildings, too, are designed to prevent standing water from collecting. “All of the buildings are built so that water flows right off of [them],” Lucas explains. “With all the rainstorms, if water got caught on the buildings…it would form a pool, and then mosquitoes would hatch their eggs and you’d have thousands of mosquitoes.”

So Disney World buildings have a certain shape that doesn’t allow water to collect. It’s something that guests would never notice but is very effective.

“They made every building there curved, or designed in a way so there’d be no place for the water to catch and sit there,” Lucas says. “The architecture is really appealing to the eye, but it also serves a purpose: It makes it less conducive to mosquitoes.”

See if you can spot this architecture style on your next trip to the parks to visit these things debuting in Disney in 2019.

Even the plants in and around the Disney World property are chosen with the intention of eliminating standing water. Plants are chosen because they won’t allow water to puddle in them. Bodies of water are kept free of plants like water lilies that mosquito larvae can hide underneath.

“They also stock-fill those places with minnows, goldfish, and a type of fish called mosquito fish that eat the larvae,” Lucas explains.

Right from the get-go, Walt Disney made it clear that he didn’t want nasty chemicals floating around his park.

“[He] did not want to ruin the environment at all, so they couldn’t use pesticides,” Lucas explains. “It’d be easy to just spray the whole thing, but he wanted it to be something natural.” So, instead of pesticides, the park uses an unusual insect repellent: liquid garlic. Mosquitoes notoriously can’t stand the smell of garlic, so Disney sprays an extract around the park. 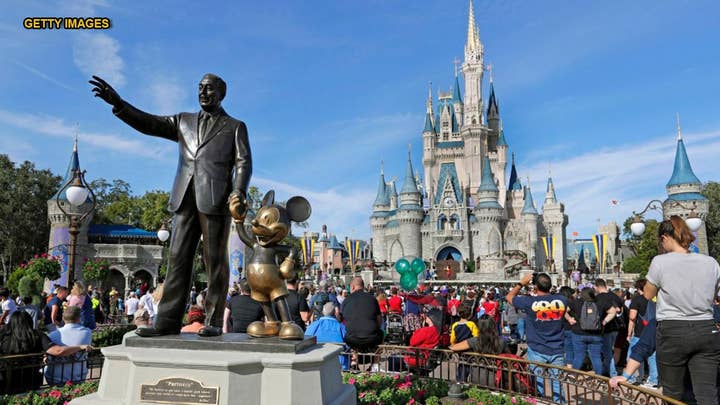 “The amount that they use is so small that humans can’t smell it, but mosquitoes are very susceptible to it,” Lucas says. It’s certainly quite the operation, but Lucas acknowledges that none of it would have been possible without Potter.

“Without him, they might’ve built the place, but they’d have a problem today with mosquitoes,” he says. We’re sure glad he’s immortalized with a boat!