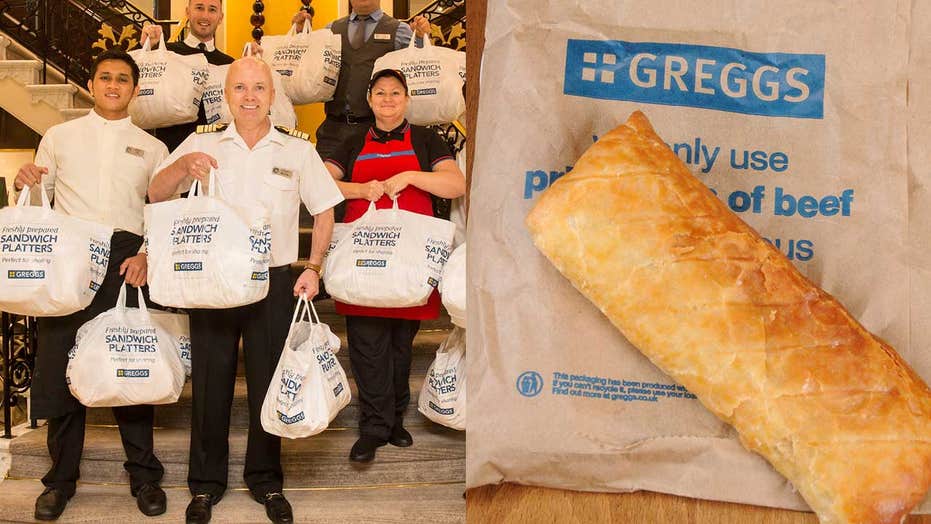 It’s apparently not a trip to the U.K. without a sampling from the region’s premier sausage-roll chain.

That seemed the consensus among the crew of the Amazara Journey cruise liner, who, during a stop in Newcastle Upon Tyne, England, decided to order up some delivery from a U.K. bakery chain that specializes in sausage rolls, pastries and several other local snacks.

Captain Johannes Tysse, center, said the crew from the U.K. convinced him the trip "wouldn’t be complete without a taste" of the local bakery chain.  (Taylor Herring)

SEE IT: MEN SAVE WHEELCHAIR-BOUND CRUISE PASSENGER WHO ROLLED OFF DOCK

Captain Johannes Tysse, said the crew felt it necessary to give the 700 passengers a taste of the not-so-upscale local fare from Greggs, since the focus of the 10-day cruise was the culinary and cultural offerings of Northern Europe.

“Our U.K. crew told us that a visit to Newcastle wouldn’t be complete without a taste of Greggs as a culinary ‘must-try,' and that for European travelers it joins the echelons of British food icons alongside Fish & Chips, Afternoon Tea and the Sunday Roast,” said Captain Tysse, who placed the order.

Among the offerings were sausage rolls (sausage encased in flaky pastry), vegan sausage rolls, and stottie cakes, a round bread loaf often served in Northeast England.

According to Captain Tysse, the passengers were pretty psyched about the delivery, too.

“We were all very impressed and even got a cheer,” he added of the crew’s efforts.

Luckily, for anyone who wasn’t super thrilled about the store-bought baked goods, Azamara Cruises prides itself on its culinary offerings and “Destination Immersion” program, which aims to incorporate the cuisine of the destinations into the ship’s menu.