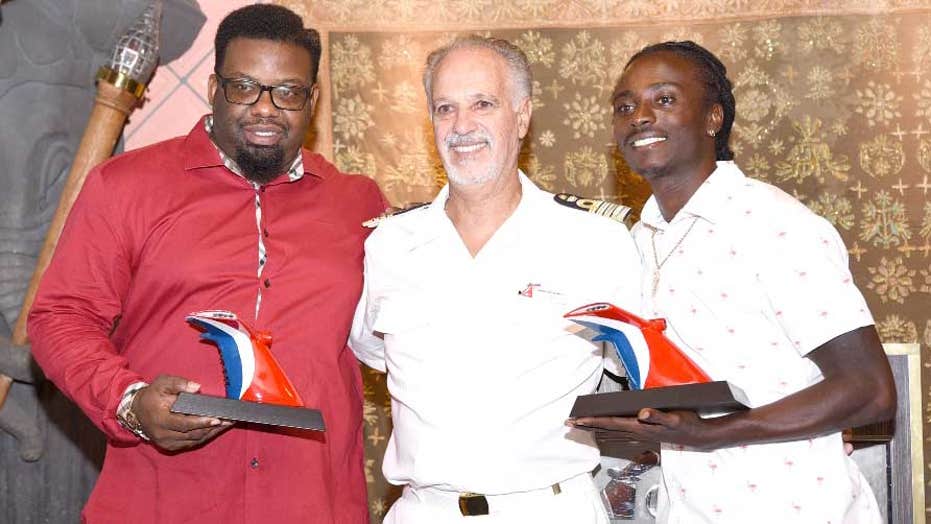 The Carnival Cruise Line has joined with government officials of the U.S Virgin Islands in honoring the two brave men who saved a wheelchair-bound girl from drowning last Monday morning.

Carnival recently hosted a ceremony for Randolph Donovan and Kashief Hamilton, who were working at the West Indian Company Dock in St. Thomas when they observed the girl, who was not identified, roll off the edge. The two quickly sprang into action, working together to help get her out of the water.

Kashief Hamilton (left) and Randolph Donovan (right) were honored for their heroic efforts in a ceremony on the Carnival Fascination in St. Thomas. (Carnival Cruise Line)

The young girl, along with her family, were passengers aboard the Carnival Fascination, which was docked nearby.

“During a ceremony aboard Carnival Fascination, Captain Candeloro Donato recognized the heroic efforts of Randolph Donovan and Kashief Hamilton who assisted a guest who accidentally fell in the water on the St. Thomas pier while being escorted in a wheelchair by a family member,” the cruise line said in a statement released Tuesday.

In photos from the ceremony, Donovan and Hamilton can be seen posing with Captain Donato after receiving their awards.

Captain Candeloro Donato handed the awards to Donovan and Hamilton, who were working with an entertainment group on the St. Thomas dock when they witnessed the girl go into the water. (Carnival Cruise Line)

Footage of last Monday’s incident, which was shared to Facebook last week, shows just how frightening the situation was. In the clips, Donovan can be seen treading water as he attempts to hold the girl above the surface. Meanwhile, Hamilton tried to secure a rope around both the girl and Donovan as emergency personnel helped to extract them from the water, according to the Virgin Islands Consortium.

Subsequent video footage shows the girl, safely on the dock, being attended to by emergency personnel. Two people, identified as the girl’s family members, are seen tearfully thanking Donovan for his heroic efforts.

“I couldn’t think I just had to move,” Donovan wrote on Facebook, adding, “I told myself I had to save her."

“Thank God we all are safe and sound. The love that is coming is tremendous,” Hamilton wrote on his own Facebook page.

Local officials in St. Thomas praised the duo’s efforts. Kurt Vialet, the senator for the 31st and 32nd Legislature of the Virgin Islands, hailed the men as heroes, telling Fox News that their actions should “[make] you feel good about being a Virgin Islander.”

Commissioner Joseph Boschulte of the U.S. Virgin Islands Department of Tourism also commended both men on their brave efforts.

"I want to thank and acknowledge two members of our Visitor Experience team at the Department of Tourism -- Kashief Hamilton and Randolph Donovan, Jr. --who went above the call of duty yesterday to save a disabled Carnival Fascination passenger from drowning at The West Indian Company (WICO) dock," Boschulte wrote.