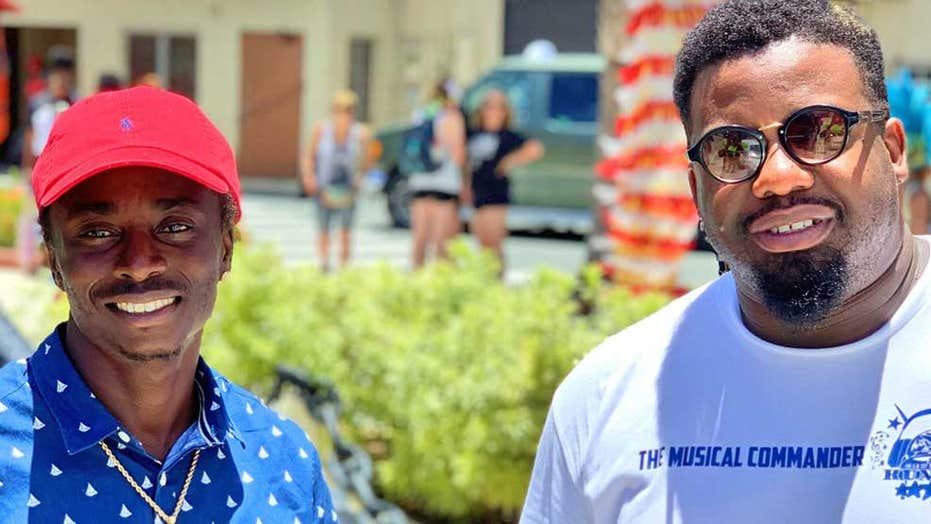 Not all heroes wear capes.

A Carnival cruise passenger in a wheelchair fell off a dock in St. Thomas was rescued by two local men who are now being hailed as heroes by officials in the U.S. Virgin Islands.

The girl, a passenger aboard the docked Carnival Fascination, was visiting the island with family when she rolled off the dock and into the water on Monday morning, the Virgin Islands Consortium reported.

That’s when St. Thomas residents Randolph Donovan and Kashief Hamilton, who were both working for an entertainment group at the West Indian Company dock, quickly sprang into action.

Footage of the heart-stopping scene shows Donovan in the water with the girl, propping her head above water while a life preserver is placed around her torso. Hamilton, who was actually DJing for the crowds before the incident, had also jumped into the water to secure a rope around both the girl and Donovan while emergency personnel helped to extract them from the water, according to the Consortium.

Subsequent video footage shows the girl, safely on the dock, being attended to by emergency personnel. Donovan, exhausted, is then seen resting as security guards gather information.

A large crowd of people also erupted in cheers as two people, identified as the girl’s family members, tearfully thank Donovan for his heroic efforts.

“I couldn’t think I just had to move,” Donovan wrote on Facebook.

“I told myself I had to save her,” he added, explaining that he could barely keep afloat himself until “DJ Country” — Kashief 'Kuntry' Hamilton — helped out.

Hamilton, too, took to Facebook to "thank God" the incident had a happy ending.

“Wake up this morning set and ready to go DJ on WICO Dock for the tourist coming in on the [C]arnival ship not knowing I will be saving a tourist[‘s] life,” Hamilton wrote. “Thank God we all are safe and sound. The love that is coming is tremendous."

“Everyday heroes with unassuming personalities live among us!” Vialet wrote, adding that he was sure the girl's family was "forever grateful."

Vialet also told Fox News he was "extremely proud of the heroic actions taken by Kashief Hamilton and Randolph Donovan. who quickly sprung to action when they realized that a cruise ship passenger had inadvertently fallen off the dock.

"Their actions saved her life and makes you feel good about being a Virgin Islander."

Commissioner Joseph Boschulte of the U.S. Virgin Islands Department of Tourism also commended both men on their brave efforts.

"I want to thank and acknowledge two members of our Visitor Experience team at the Department of Tourism - Kashief Hamilton and Randolph Donovan, Jr. - who went above the call of duty yesterday to save a disabled Carnival Fascination passenger from drowning at The West Indian Company (WICO) dock," Boschulte wrote.

A representative for Carnival confirmed the guest was examined by its medical staff, and did not sustain any injuries. She was also provided with a replacement wheelchair for the remainder of the cruise.