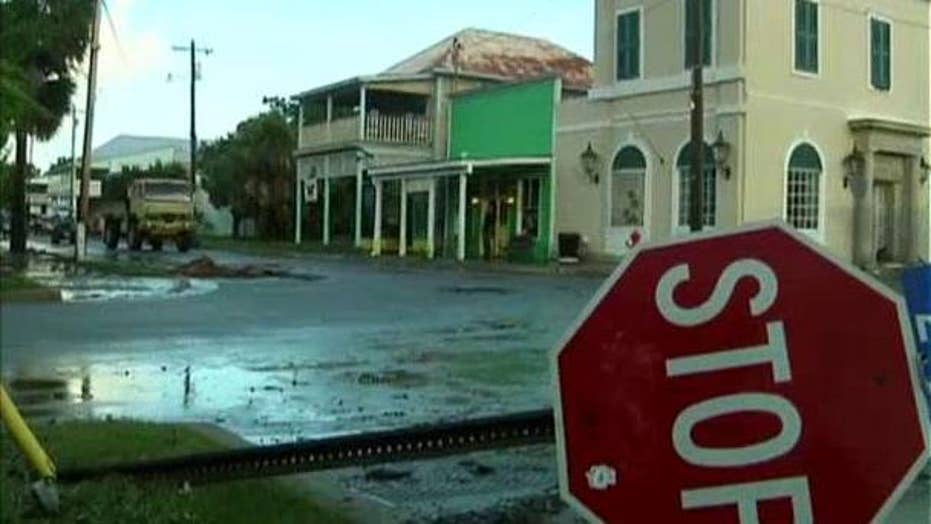 Hermine downgraded to tropical storm as it moves north

The beach may be the last place you’ll want to go to celebrate Labor Day weekend — the unofficial last weekend of summer — this year.

On the East Coast, Tropical Storm Hermine – the first hurricane to make a direct hit on Florida since 2005 – was barreling through Georgia Friday morning on a path expected to take it through the Carolinas and then back into the Atlantic. But meteorologists say it will deliver strong winds, heavy rain and very rough surf to beaches all the way up to New England over the weekend and into next week.

In the Pacific, beachgoers in Hawaii were being told to exercise caution and heed all official warnings as they faced their second major storm of the week.Hurricane Lester, now a Category 2 storm, is not expected to make a direct hit on the islands, but forecasters are warning of dangerous surf, driving rain and heavy winds in parts of the state.

And Lester is saying hello to Hawaii just as Tropical Storm Madeline, which brushed by the Big Island on Wednesday, is saying goodbye. A flash flood watch remained in effect on the Big Island Friday morning, and the entire state was under a wind advisory.

But there are a lot of places in this country that don’t have sand and surf, and AAA is still predicting nearly 34 million Americans will travel at least 50 miles from home over the five-day period that ends on Labor Day.

Here’s the best way to get from here to there and back again on this last, possibly very soggy, weekend of summer.

If you’re traveling by car:

Airport delays, flight cancellations and low gas prices ($2.23 for a gallon of regular) will put more cars on the highways this weekend. “Americans will purchase about 400-million gallons of gasoline each day over Labor Day weekend,” predicts the Oil Price Information Service.

Before driving off, check the local news for flood warnings, and avoid areas that have been hit by heavy rainfall, since flooding is expected in many parts of the U.S. this weekend. A routine check of your vehicle’s vitals is always advisable. Keep up with scheduled oil changes and check the tire pressure, windshield wipers and fluid. Most importantly, always travel with a first aid kit and a car emergency kit.

To avoid heavy holiday traffic, Saturday is the best day to leave this weekend. And try to schedule travel during off-peak times — before 10 a.m. and after 10 p.m.

If you’re traveling by plane:

This holiday weekend will be busier than ever. Airlines for America, the major airlines’ trade association and lobbying group, says 15.6 million passengers are expected to travel by air this weekend. Friday will be the busiest day, making Saturday the best day to travel.

Be sure to schedule ample time to make it to your plane. On Wednesday, the TSA urged domestic passengers to arrive 2 1/2 hours early for their flights, and even earlier than that over the holiday weekend.

Due to tropical weather conditions in FL, service thru 9/3 may be interrupted. Rebook: https://t.co/68fEXvlGuz pic.twitter.com/hmMs9v3gbh

Stay connected with the airlines via Twitter. Major airlines tweet travel advisories that provide solutions to delays or cancellations.

“Delays due to the weather this weekend should be felt all over the country,” says Howard Altschule, certified consulting meteorologist for Forensic Weather Consultants. “Even if you are in Chicago, your plane might be coming from Baltimore, where weather has delayed the flight and you might not be able to get home.”

Headed to the Southeast?

Many airlines, including United, Southwest, American and Delta, are waiving change and cancellation fees due to this weekend’s storms, saving travelers hundreds of dollars.

If you’re traveling by train:

The best way to avoid airport security lines and heavy highway traffic is to travel by train. You don’t have to worry about finding a rest stop; you can surf the web with free Wi-Fi, and you can sprawl out with lots of leg room. Nearly 30 million travelers ride on Amtrak every year. Fares are usually cheaper than flying, kids ride half-price and there are discounts for students and AAA members.

But trains aren't perfect. They, too, can be subject to weather delays, sometimes due to trees and debris on tracks, flooding and strong winds.

Amtrak has suspended service in its Southeast region due to Tropical Storm Hermine. Check the Amtrak website for travel advisories before you head to the station.

If you're planning a beach trip anywhere along the East Coast, it won't hurt to pack a couple rainy day activities. And don't forget the poncho.