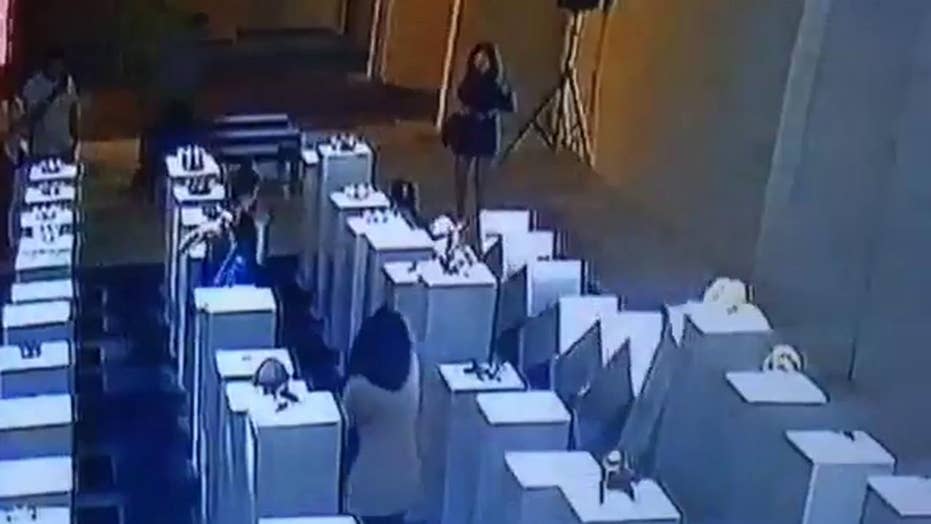 Is it a stunt? Selfie-taker causes major damage to art

Raw video: Woman appears to crouch down to take selfie before falling backwards knocking down art in domino effect causing $200,000 worth of damage

She must not be proud of her selfie.

A woman taking a selfie at a Los Angeles art exhibit sent
shockwaves around the room after knocking over several displays, causing $200,000 in damage.

The unidentified woman was at The 14th Factory for the “Hypercaine” installation when she appeared to crouch down in front of one of the displays for a photo and fall backwards, video of the incident shows.

The tumble set off a domino effect, knocking over at least 10 rectangular pedestals holding sculpted crowns and other headpieces.

A spokeswoman for The 14th Factory told Fox News in an email that three sculptures were permanently destroyed, while others were partially damaged. The reckless selfie, which happened two weeks ago, caused about $200,000 in damage.

Video of the incident emerged on YouTube Thursday and prompted some to question whether the accident was a stunt, but the spokeswoman confirmed to Fox News that the pricey accident was indeed real.

“There has been speculation whether this really happened or is a PR stunt. The truth is, the event did happen and it was caught on our security camera,” she said.

The damaged sculptures took the artists about 20 to 30 hours to make, according to the spokeswoman, who said that many of the artists boast careers in Asia that span over 20 years.

“It would be pretty irrational for the artists behind these sculptures to intentionally inflict harm on their own work hoping to gain any benefit,” she added.

The 14th Factory is a non-profit temporary art project that will be in Los Angeles until July 30th.