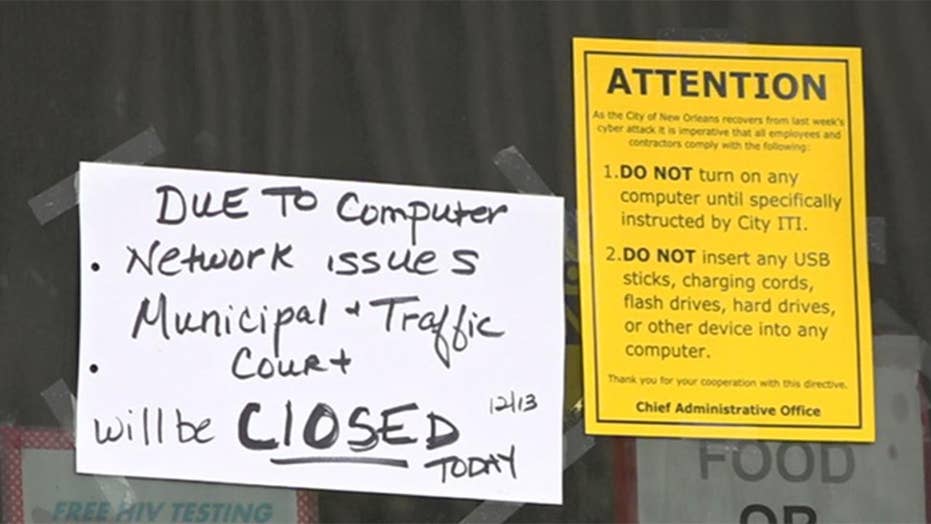 New Orleans' digital infrastructure is crippled for days after hackers launched a cyber attack on the city.

NEW ORLEANS – The city of New Orleans has launched a forensic investigation into the cyberattack that has crippled the city’s digital infrastructure for days.

Officials said the city was confident that it would be able to recover data that was lost after hackers infected roughly 4,000 city computers with ransomware. Though it was unclear when the data would be recoverable as about 50 volunteer state agents and government partners were expected on the ground to begin re-imaging information.

“Our agents are still collecting information and determining the root cause of our attack and whether or not any data has been compromised,” said Kim LaGrue, Chief Communication Officer for the city of New Orleans. “From what we know, we are confident that the data we have is recoverable.”

BIGGEST CYBER-THREAT WARNINGS AHEAD OF 2020 ELECTION

Collin Arnold, Director of Homeland Security and Emergency Preparedness for New Orleans said both the Federal Bureau of Investigation and the Secret Service were working with the city in the forensics stage of the investigation. New Orleans’ Emergency Operations Center has monitored the cyberattack since the city declared a state of emergency last Friday.

Mayor LaToya Cantrell said the city was considering the security breach as an active attack. Though as of Monday the city said it had not received any demands for a ransom.

“This security breach is one of public safety and we are taking just as that—very serious,” said Cantrell. “This is not only the new normal, but it is a priority for the administration to invest in our infrastructure. That includes cybersecurity.”

Cantrell confirmed the city had purchased cybersecurity insurance at the back end of 2018. The insurance is expected to cover nearly $1,000,000 in costs the city has incurred since the onset of the attack. Though it does not cover the costs of paying a ransom.

As citizens and attorneys showed up to municipal and traffic courts the doors were closed with a bright orange letter on them warning people that the courts were non-operational due to “computer network issues.” The idea of their personal information possibly being lost in cyberspace crossed some of their minds.

“This interferes with due process and the handling of the judicial system. Things that may be good for your client might get lost,” said defense attorney, Michael Idoyaga. “You think that maybe it’ll be a couple of computers here and there, but a large, widescale thing like this is pretty scary.”

New Orleans Mayor, LaToya Cantrell updates the public on the city's progress in restoring services after a cyber attack was launched against the city. (Fox News/Charles Watson)

Others like Harold Skinner felt helpless as he waited for a ride to get to work. His hope was that things return to normal soon.

“It does concern me, but there’s nothing I can do about it. I don’t think I’m the only one. I think it concerns a lot of people” said Skinner.

New Orleans is the latest big city target of hackers. Philadelphia, Baltimore and Newark, New Jersey are among dozens of American cities that have been hit with ransomware. According to IT security company, Barracuda, at least 70 state and local governments were hit with ransomware in the first half of 2019.

In the case of Baltimore, the city was struck in May by hackers who demanded $80,000 in cryptocurrency. In return, the hackers would give the city access again to its computer systems and city servers. Mayor Bernard C. Young refused to pay the ransom. Without insurance, the city proceeded to spend millions of dollars in recovery efforts.

The city estimated by year-end Baltimore would spend around $18 million. Most of the funds attributed to recovery efforts and the loss of revenue while the city’s systems were compromised.

Cybersecurity experts believe an uptick in cyberattacks targeting cities is due to their financial insecurities. According to a 2016 survey by the International City/County Management Association and the University of Maryland Baltimore County, more than 50 percent of local governments reported an inability to pay competitive salaries, lack of cybersecurity staff and lack of funds as significant barriers to achieving optimal cybersecurity.

“A lot of the things that used to be done on paper are now done on computers. So many functions of government are computerized that it is essential that we’re securing those systems, as well as the data,” said Hamerstone. “Information security needs to be a priority for all organizations, government entities and municipalities especially.”

Mayor Cantrell said the city is currently building a new digital infrastructure. Meanwhile, agencies that are operational have had to get work done manually. The New Orleans Police Department has said it is currently writing reports and warrants by hand until their system is fully operational.

Though the city has identified any parties who are believed to be responsible for the cyberattack, Skinner believes the city needs to find them and hire them, so this incident never happens again.

“Maybe they can catch a hacker and make them work for them,” said Skinner.