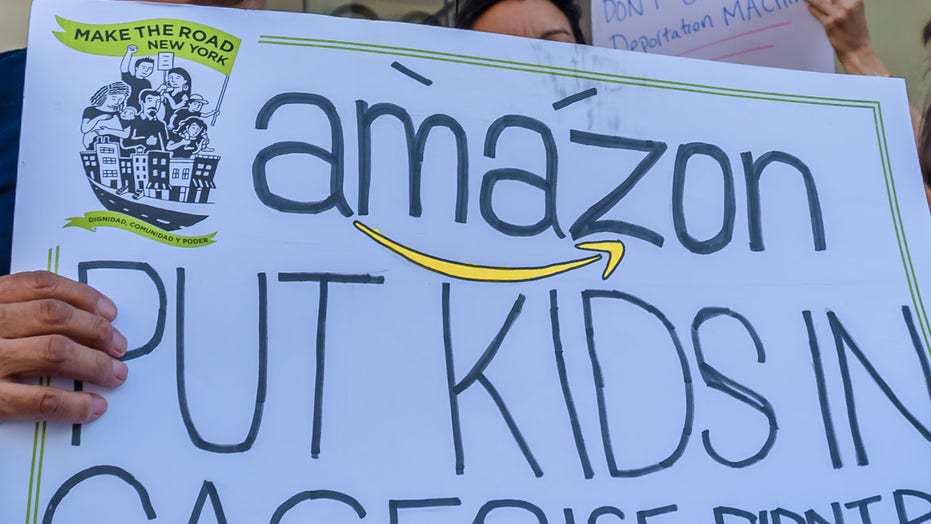 Dozens of members of Jewish community groups protesting Amazon's cloud computing contracts and other work with Immigration and Customs Enforcement were arrested at an Amazon Books store in New York on Sunday.

Up to 1,000 demonstrators shut down the Amazon Books store in midtown Manhattan to demand the tech giant stop providing services to ICE and to read aloud the words of detained immigrant families -- as well as to read from Eicha, known as the Book of Lamentations in the Hebrew Bible.

The demonstration was held on Tisha B'Av, which is a traditional day of mourning atrocities in Judaism, as a way to "mourn the lives Amazon has helped ICE destroy," according to Jews for Racial & Economic Justice. More than two dozen immigrants have died in ICE custody during the Trump administration, according to Human Rights Watch.

According to accounts posted online by the organizations, which included Jews for Racial & Economic Justice and Make the Road New York, about 40 protestors were arrested by the New York Police Department.

Accounts posted to Twitter by the community organizations that used the hashtags #NeverAgainIsNow and #JewsAgainstICE show members marching to the location, occupying the store, sitting and praying and singing songs in Hebrew.

"We will not stay silent while Amazon collaborates with ICE the way IBM collaborated with the Nazis," the group Jews for Racial & Economic Justice said via Twitter. "We will do what we wish others had done for us: SHUT IT DOWN."

At some point, the NYPD entered the store in order to remove the demonstrators. Meanwhile, a crowd of several hundred had formed outside the store.

Amazon did not immediately respond to a Fox News request for comment.